In the 5th century BC Nehemiah, governor of the Persian province of Judaea, referred frequently to ‘Tobiah, the Ammonite’, governor of the province east of the Dead Sea.
Two centuries later, in the long conflict between the Ptolemies and the Seleucids, the Tobiah family reappears in the archive of Zenon, an agent of Ptolemy II Philadeiphus.
In one document, dated 12 May 259 BC and addressed to Ptolemy himself, Tobiah offers a gift of horses, camels, dogs, and slave boys from his country estate in a well- watered valley west of ‘Amman, at today’s ‘Iraq al-Amir (caves of the prince).

Iraq Al-Amir is within the municipality of Am- man in the Jordan Valley.
It is considered as one of the distinctive areas in Jordan with its mountains, settled on a hill with many springs and is famous for its olive trees, in addition to other forest trees.

It is located about 15km southwest of the town  of Wadi Al-seer (sometimes Wadi As seer/ Wadi Al Sir/ Wadi Seer) it has a population of about 6,000 people. The historical part lays about 0.5 km South of the town, being the home of one of the most original monuments in Jordan, and perhaps in the Hellenistic Near East: Qasr al Abd (Castle of the Servant).

It was built by a Persian prince in the 3rd c. BC in the middle of the island, located in an artificial lake.
There are many caves in the hills that date back to the Copper Age.

The cultural and traditional resource attractions in Iraq Al-Amir are as following: Archaeological sites, including Iraq al-Amir (both the palace and the caves), Mullaqat al-Dayr, al-Bassah church and cave, ancient Roman aqueduct, watermill, dolmen. 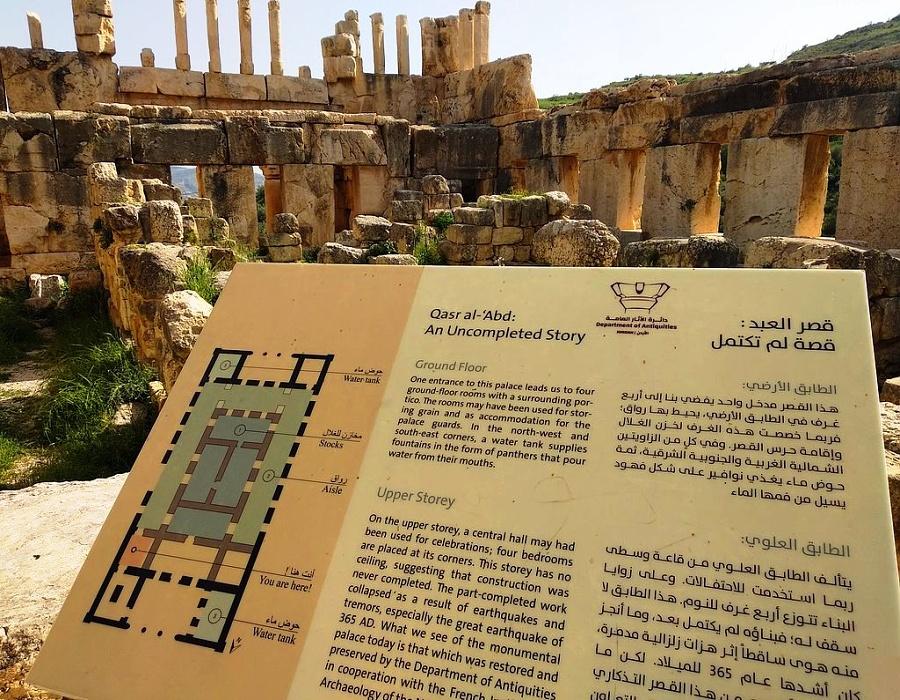 Other nearby ruins (ruins of a village from the same period, an isolated house, a fountain perched on the cliff), which are barely visible today, and a few written sources.

Suggest that the site was the center of a vast estate belonging to a powerful family, the Tobiads, which extended from Philadelphia/Amman (a Tobiad is known from there) to the lower slopes of Wadi Al-seer; a green valley with a lot of rainfall and rich in agricultural production Hyrcanus (born around the late 3rd c. BC) was the youngest son of Joseph the Tobiad.

He took refuge in the family estate of Wadi Al-seer, where he remained for twenty years fighting the Nabataeans.
He then began the construction of a large pres- tigious building, living meanwhile in the natural caves in the cliffs of the wadi, which he had adapted to entertain his friends and to house his riders.

But around 170–168 BC., Antiochus IV plundered the Temple (where the treasure of Hyrcanus was kept) with an intention to fight this powerful man who was very independent and perhaps still loyal to the Ptolemys.
Upon hearing this, Hyrcanus committed suicide, and we hear no more of the Tobiad family after that date.

Al-Dayr village, located about 2 km past Wadi Al-seer on the road to the village of Iraq alAmir, contains Mu’llaqat al-Dayr (The Monastery) which is situated on the west side of Wadi Al-seer.
It is carved into the rock and includes two parallel chambers and an entrance way.

Eight hundred niches were discovered distributed in six rows on the first floor, seven on the second floor, and eight on the third floor.
The niches themselves are 22 cm high, 25 cm wide at the base and 22 cm deep (Butler, 1907; Ji, 1998b). Chang–Ho mentioned that the purpose of Mu’llaqat al-Dayr was either as a place to house the skulls of monks or for pottery lamps.

The sub-road leading to the site needs to be improved and paved. Also, signs outside of and within the site are needed for tourists. 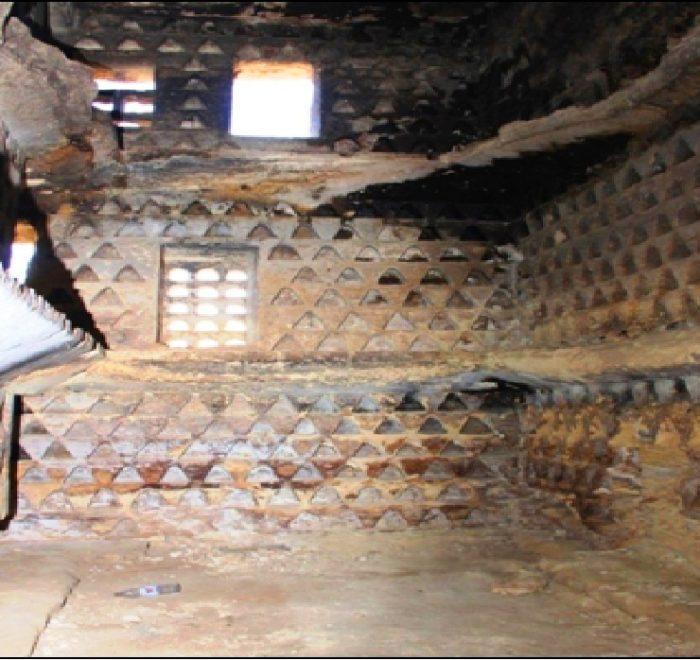 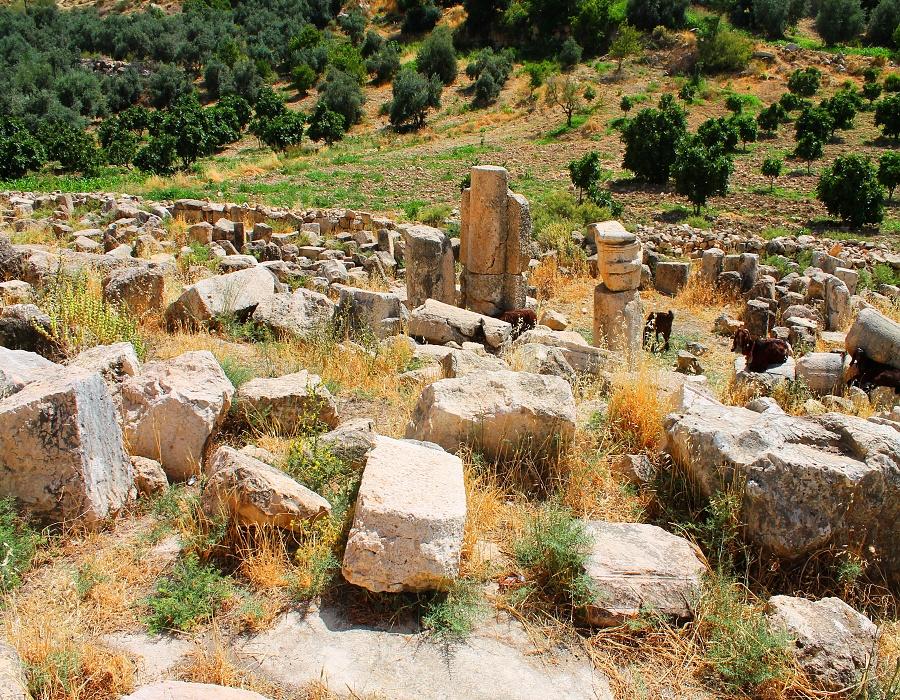 Bassah Cave is an early Bronze Age cemetery of shaft tombs located near Khaf al-Bassah (Mugharat al-Kaniseh). It is situated on the top-most hill on the right side of the route into the Bassah region, approximately 3 km west of Wadi Al-seer.

The hill is still used as a cemetery.

Bassah Cave is characterized by a facade decorated with a triangle containing an arch and three crosses in the middle.
The most important discovery at Bassah is that the cave was affiliated with the Byzantine church as appears on the western side of the Bassah Cave .

Currently, the cave and the church are in good condition, but a protection needed around the site for maintenance and to protect it from off-road vehicle damage because it is situated along the main street . Furthermore, informational signs for tourists and directional signs are still needed.

Fifteen caves in the cliff face have an easy access via stone staircases from the paved road.
Six caves are on the lower level, while the nine of the upper level are connected through a 300 m long gallery, from which a spectacular panorama of the landscape can be enjoyed as well.

Scrapers and bone tools used for hunting found inside the caves reveal a prehistoric use as shelter.
The stone block with niches at the left end of the upper level, identified as a columbarium (dovecote), relate the caves to ancient cult practices.

Most of the caves have entrances which reach ground level with staircases ranging between 4 and 11 steps.

Inside the caves there is a corridor leading to a small semi-circular room which may have been used as a shelter in times of danger, such as military and political crises.

Over the entrance of cave number 13, there is an inscription in Aramaic of the Hebrew name “Tobias,” which can also be found on the next cave to the left. 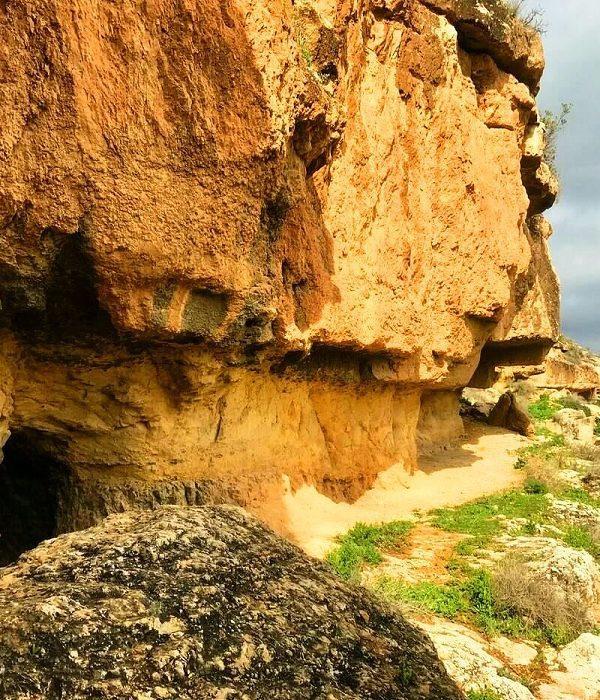 It’s said that King George V of the United Kingdom visited the site in 1882, in addition to English traveler and archaeologist Gertrude Bell in 1910.

The small but impressive Qasr Al Abad,  is one of the very few examples of pre-Roman construction in Jordan. Mystery surrounds the palace, and even its precise age isn’t known, though most scholars believe that Hyrcanus of the powerful Jewish Tobiad family built it sometime between 187 and 175 BC as a villa or fortified palace.

Although little is known for definite about the history of Qasr al-Abd it is widely believed to have been built by a Tobiad notable, Hyrcanus of Jerusalem, head of the powerful Tobiad family and governor of Ammon.
Credence for this theory is gained from the fact that the Hebrew name ‘Tuvya’ or ‘Toviyya’ (Tobias) is engraved above the adjacent burial caves of Iraq al-Amir, which share their name with the nearby village.

According to a local legend, Tobias was a commoner who fell in love with the daughter of a nobleman. When he asked for her hand in marriage, the nobleman said that Tobias could only have her hand if he built the so-called “Castle of the Slave.” After completing the castle, the nobleman had Tobias killed as he did not want his daughter marrying a commoner.

The palace was badly damaged by a great earthquake that hit the region in 362 AD.

The building preserved its original two stories due to the fact, that was reused as a church during the Byzantine period. 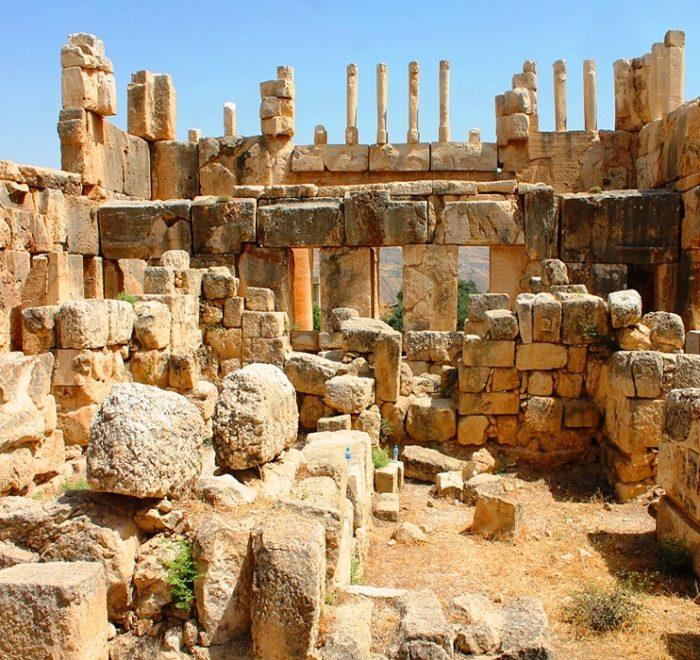 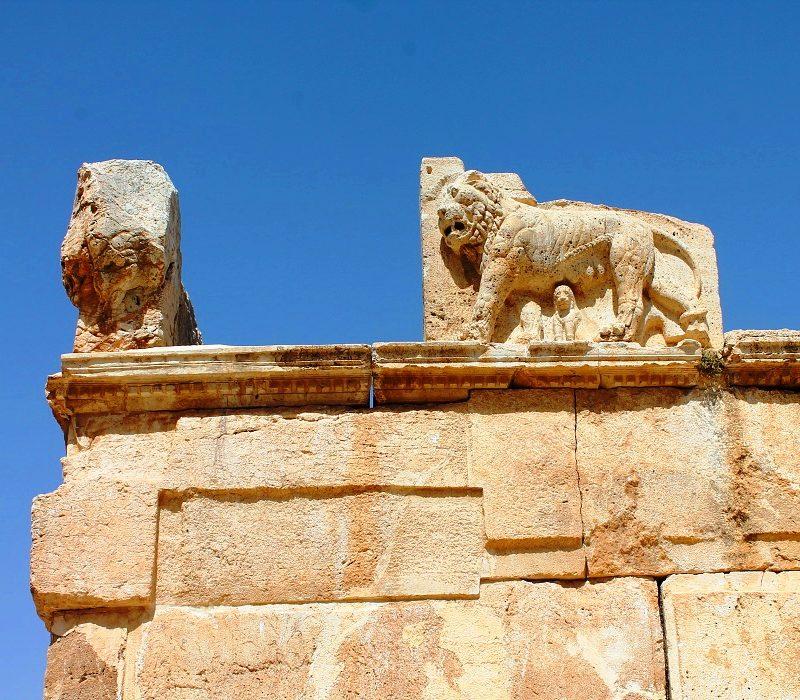 Qasr al-Abd (Palace of the Slave) is the main archaeological site in Iraq al-Amir, mentioned in biblical and historical texts and visited by many scholars.
Qasr al-Abd is a large two-story structure built of large, white, rectangular 14 m-high stones and measuring (18.5 m east-west × 37 m north-south), and standing on an artificial terrace southwest of the village.

The main ground on the first floor includes four storage rooms, with seven windows that open out along a corridor on the east and west sides.
It has four corner towers and a balcony on each tower, with two galleries of 21 fluted Corinthian columns on the east, west sides and a central festival hall.

The whole structure is adorned with sculptured lions and panthers. Although the building looks simplistic or smaller than it actually is, whole panels are built of just one giant block. The portico columns have also been constructed as one piece rather than in drums; they are non-segmental.

Archaeologists have established that Qasr al-Abd once stood in a much larger estate, which was originally surrounded by a wall, and included a park with trees and shrubs. A large stone olive press has been found on the site, suggesting the estate was partially self-sufficient in agricultural produce. Much of the estate now stands beneath the village of Iraq al-Amir.

Archaeological surveys in Iraq al-Amir have revealed two distinct dolmen fields on the east and west banks of Wadi Al-seer. In 1996, surveyors discovered 15 dolmens on the slopes in two areas.

Some visible dolmens are situated south of Iraq al-Amir, before reaching Qasr al-Abd. These dolmens fill the geographical gap, between the dolmen fields in the Jordan Valley and those in the Amman region.

The dolmen field in Iraq al-Amir needs to be researched and studied in more detail, because many of the dolmen fields remain in a state of collapse.
All are either whole or have enough identifiable, remains standing to call them dolmens. 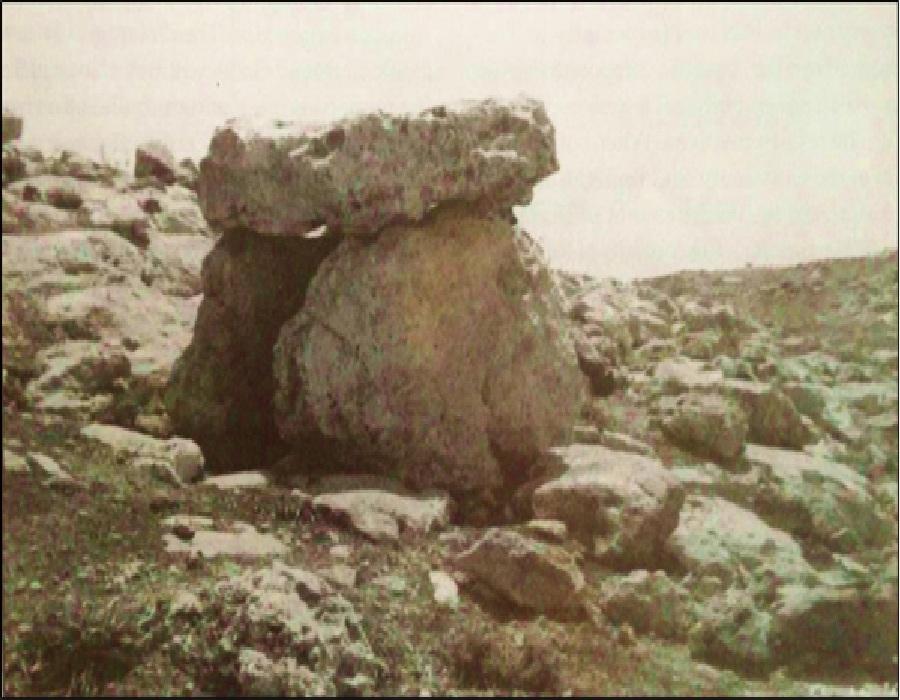 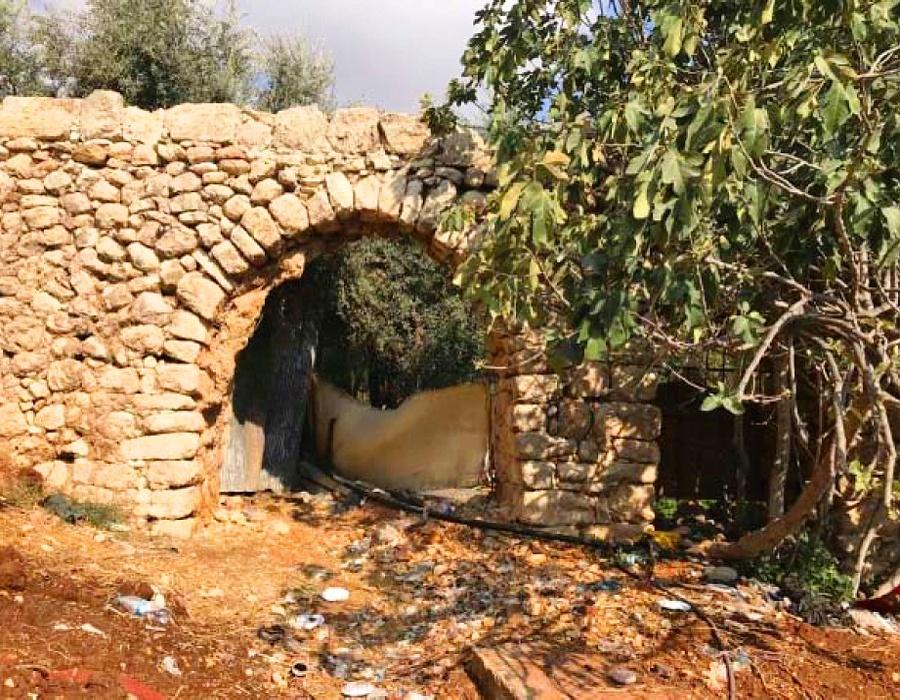 There are three old watermills south-west of Wadi Al-seer and one in al-Bassah village.
They are within a small valley extending from the north with strong running water.

The town of Wadi Al-seer is one of the ancient cities in Jordan named after one of two prehistoric queens that governed the area, Sera and Sara.

Wadi Al-seer means Valley of the Orchards because it is a famous agricultural area. It was one of the first Circassian settlements, inhabited by the Abzakh and Bzhedugh tribes in 1880, who built the the oldest mosque –  Circassian mosque “Jame al-Sharkas” “Abzakḫ Mosque”.

There is little data about the old town of Wadi Al-seer and its villages, and the gradual shift from a nomadic life to settling in rural villages and then growing into major villages with increased stability.