One of the most representative and important sites in the Near East to understand the socio-political and cultural changes that took place in the transitional period from Late Antiquity to Early Middle Ages that gave birth to Islamic culture.

Qasr al-Hallabat is named after the Umayyad desert castle located there, it is one of the most important structures with geometric mosaic pavements in Jordan.
The site This considerable complex includes the qasr itself, a mosque, a large reservoir, cisterns, an agricultural enclosure and a bath house. New excavations at the qasr and the mosque have led to a reassessment of the history of the site.
The mosaic artists at Qasr al-Hallabat possessed great technical skill. Comparative study of the decorative
elements increases our understanding of the relationship between Qasr al-Castal and Byzantine sites.
From 2002 to 2013, the Spanish Archaeological Mission in Jordan realized a long-term excavation, restoration and musealization project, directed by Dr. Ignacio Arce. Included was the systematic collection of all the remaining inscribed stone blocks, that are a very special attraction at Qasr Al Hallabat. They contain a legal text related to the military organization of the eastern border of the Byzantine Empire, decreeded by imperial court at Constantinople in the reign of Emperor Anastasius I (491 – 518 AD). 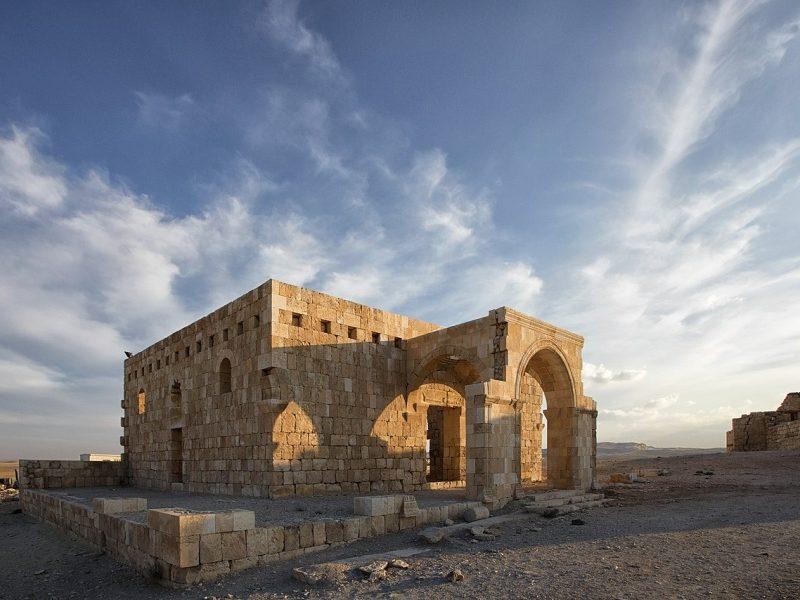 Originally a Roman structure constructed in the 2nd-3rd century AD to protect the eastern frontiers of the Roman Empire, although there is trace evidence of Nabatean presence at the site.
It was one fort of many on the Roman highway, Via Nova Traiana, a route that connected Damascus to Aila (Aqaba) by way of Petra and Philadelphia (Amman).

In the 6th century, the fort was ceded to the Ghassanids as part of the foedus treaty with the Byzantine emperor Justinian. The Ghassanids significantly altered the structure and constructed a monastery. However, by the 8th century, the Umayyad caliph Hisham ibn Abd al-Malik ordered the structures to be demolished in order to redevelop this military site and its neighboring territory to become one of the grandest of all Umayyad desert complexes. 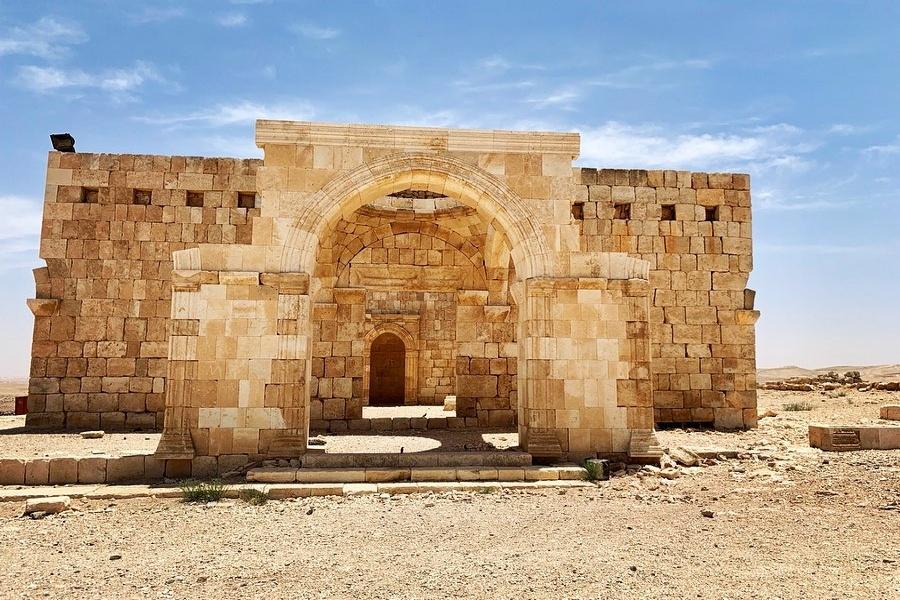 Guided by the extant plan, he incorporated a mosque, a complicated water system including five cisterns and a considerably large water reservoir, and a bathhouse. Furthermore, situated to the west of the palace remains an enclosed structure probably used for agricultural purposes such as cultivating olive trees and/or grapevines, of which only a one-layered stone footprint is still standing.

Of the mosque, three wall sections, including the mihrab in the southern wall, remain intact from the original structure. Recent reconstruction works have added back the collapsed elements.

The main palace is constructed of dark and light stones, basalt and limestone, and has a square floor plan with towers at each corner. Grand in stature, the principal structures were further enhanced with decorative mosaics depicting an assortment of animals, detailed frescoes and highly crafted stucco carvings. The site remains to be completely restored. 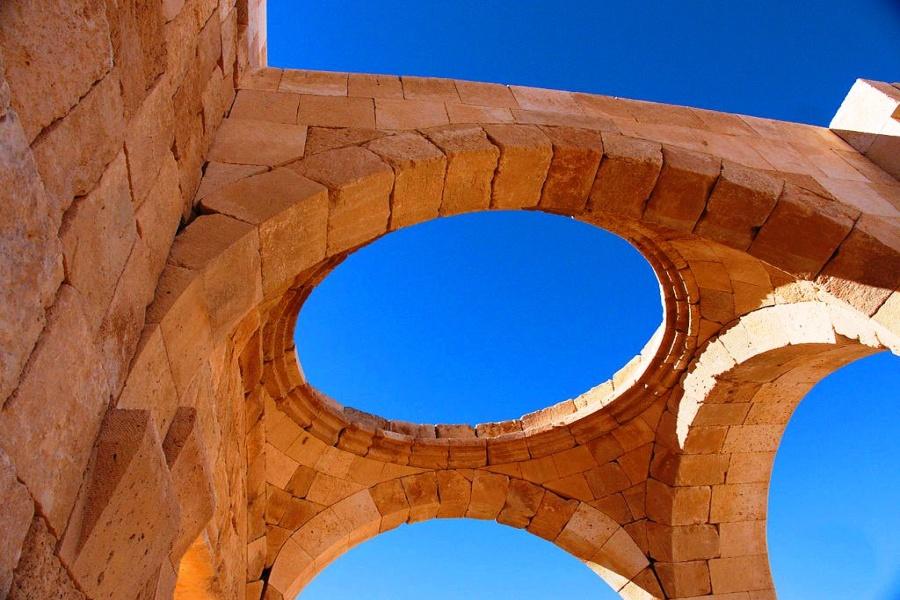 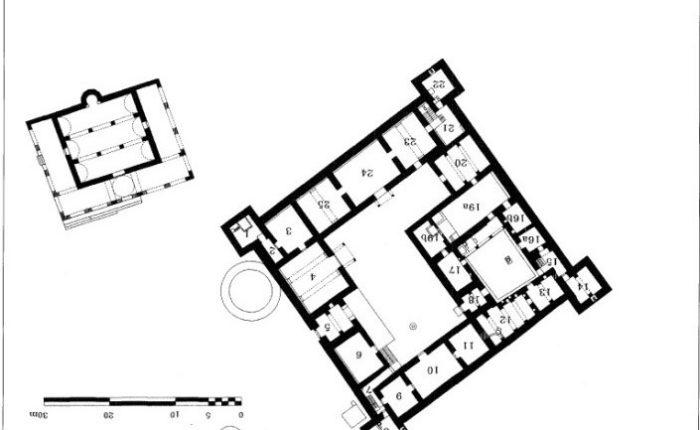 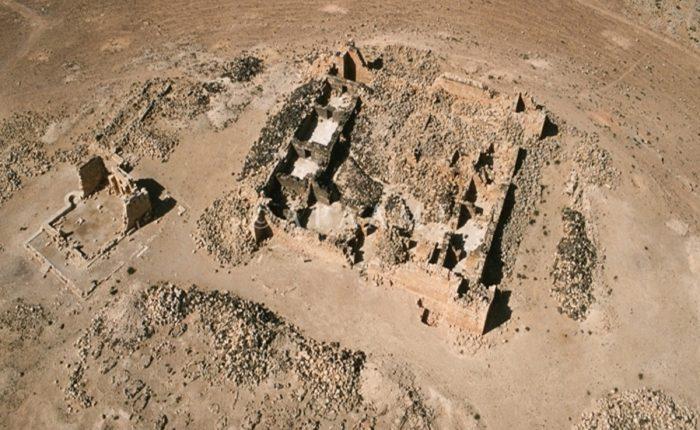 1- The castle, situated on an elongated knoll overlooking extensive views on all sides, consists of a square 44 m. to the side with angle square towers . Inside, a series of oblong and square rooms surround three sides o fa central courtyard paved with flagstones. The north west corner is occupied by an inner structure measuring 16.25 m. to the side. It also consists of a central courtyard surrounded on all sides by a series of parallel rooms,except on the south side where the main entrance to the structure is situated.

3- A huge reservoir at the foot of the south west slope of the castle,and eight cisterns dug into the western slope and in the plain next to the reservoir.

4- The remains of a cluster of poorly built houses which extend to the north west of the reservoir. These houses, which show a more or less coherent plan consisting of a forecourt with rooms on one or two sides, were apparently the dwellings of the labourers and farmers who tilled the land. The excavation of two such houses in 1981 yielded Umayyad pottery with no evidence of earlier or later occupations.

5- An irregularly shaped agricultural enclosure situated some 400 m. to the west of the castle. It measures 270 m. from north to south, by 220 m. along its widest east-west axis. A series of walls divided the enclosure into rectangular plots, and an elaborate system of sluices regulated the distribution of water to the various plots .

6- A little bath building, Hammam al-Sarakh, situated about 2 km. to the east of the castle.

The region of Qasr al-Hallabat visited and described by some early travellers. Butler of the Princeton Archaeological Expedition to Syria (1905, 1905 who reported archaeological remains and the first exploration of the site by H.C. Butler director), he was working and drawing of the first plan of the site .
A survey was begun in summer 1978 by David Kennedy, with five excavation campaigns (1979- 1985) under the supervision of Ghazi Bisheh from the Department of Antiquities of Jordan; David Kennedy (University of Sheffield) and Tom Parker (North Carolina State University) .

The dating of the Al-Hallabat site due to the Architectural building and art (carved stucco, fresco and mosaics), in addition the site dating by two main inscriptions, the first one is a Latin inscription which refers to the construction of a novun castellum, dated AD 212, and the second one is a Greek inscription dated to AD 519. Also, completely rebuilt in the Umayyad period. 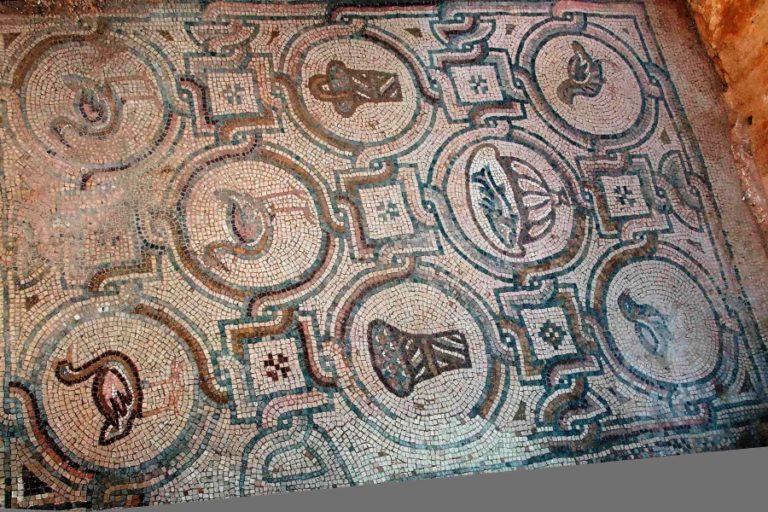