One Umayyad palace that has maintained a large part of its structure despite its exposure to erosion and destruction, as it is located on a commercial route that links Balqa to the Arabian Peninsula.
Historians have dated the castle back to the reign of Walid ibn Yazid. 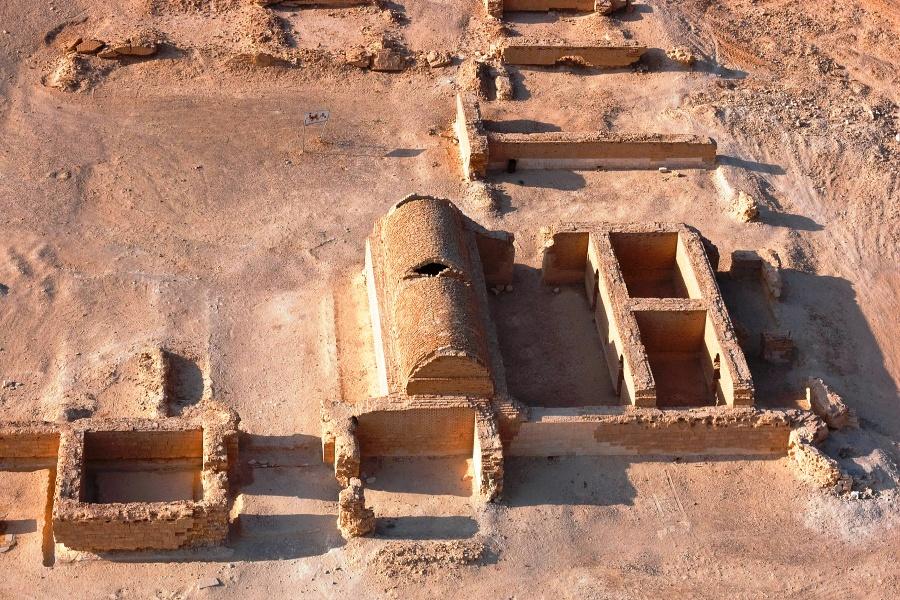 Located isolated along a wadi at the foot of a series of low hills, the location of this large Umayyad desert residence, or palace, is puzzling and majestic. The site was cut into a ridge on the soft laminated marls which dominate the Lisan landscape and built in places with sun-dried bricks (hence the name “tuba”, meaning brick in Arabic, was adopted). It should not be confused, though, with the Medieval sugar factory site in the Ghawr as-Safi with a similar name.

Portions of the old village have been thoughtfully restored to provide a glimpse of how other oasis towns looked before the New Valley development projects had their way with them; the effect is pure magic. Several hundred people still live in the town that not so long ago was home to several thousand. 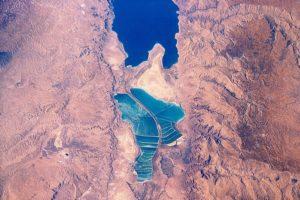 The Lisan Peninsula lies at the southern end of the Dead Sea. It’s worth a detour for the community tourism project of the Zikra Initiative, along with Lot’s Cave and the appropriately named Lowest Point on Earth Museum. The region was settled during the early-Byzantine period and a number of minor ruins are scattered across the landscape.

The area, together with the shallow waters of the Southern Ghor (Depression), is now dominated by a giant potash plant. Huge quantities of potassium chloride (Jordan’s most valuable commodity), calcium and bromine are reclaimed from the Dead Sea through solar evaporation.

The fields to the south of the Lisan Peninsula are highly fertile and produce vegetables in biblical quantities, making it a particularly colorful region to visit during the January harvest.

Although Musil had recorded the sub stantial ruins of al-Qeryeh (currently known as Dayr al-Byzanti) on the Lisan in 1898, Qasr at-Tuba was not discovered until 1928 (Abel, 1929). He described it as a possible hermitage for ascetic monks coming from the Judean desert in the Byzantine period. In fact that interpretation would correlate with the nearby site of al-Qeryeh which is probably a monastery itself (surface finds of mosaic cubes and marble fragments attest to a church and other rooms to a monastic complex ).

In the spring of 1994 Qasr at-Tuba was re-discovered by geologists and engineers prospecting for oil on the Lisan. It was obvious that illicit excavations were taking place so it was decided to rescue these inscriptions before they were completely destroyed. 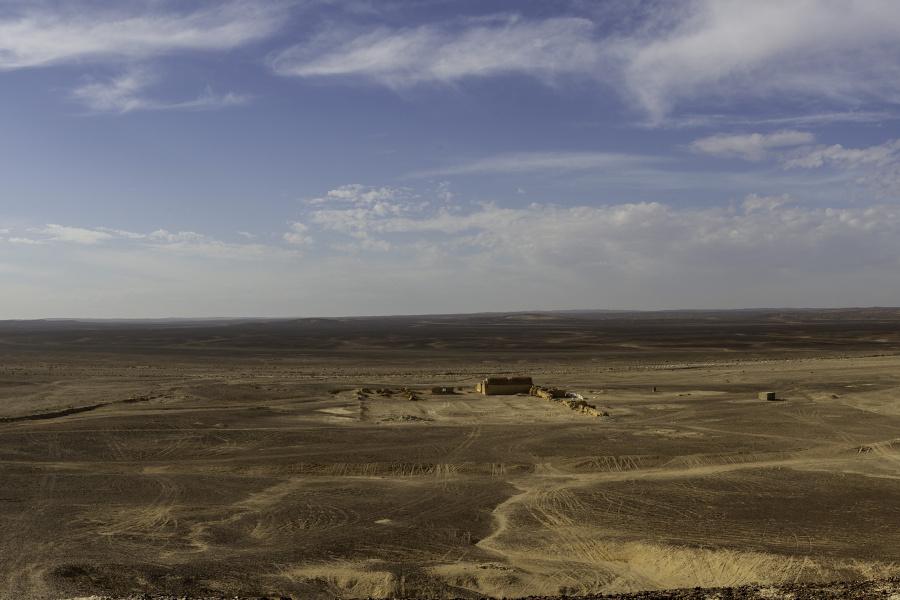 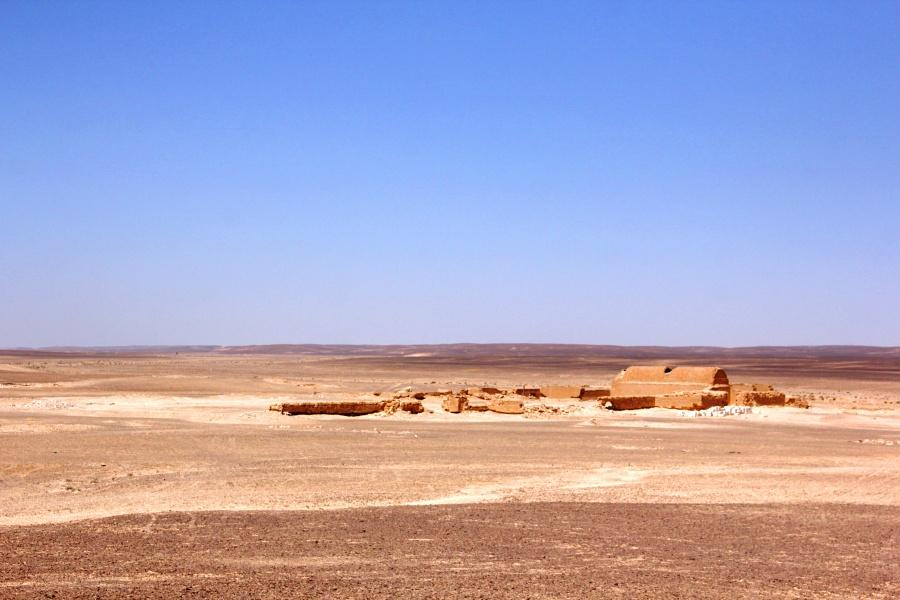 Qasr Tuba is one of the large Islamic desert castles Located isolated along a wadi at the foot of a series of low hills, the location of this large Umayyad desert residence, or palace, is puzzling and majestic.

It’s about 95 km southeast of the capital Amman and 63 km direct distance from Al-’Azraq, in the central Jordanian desert (N 31°19′34.5; E 36°34′15.8).
Its location is relatively isolated, in a desert location and access can be difficult. The castle is situated between wadi Al-Ghadaf in the east and wadi Utarat Al-Ghabasha in the west.

Most desert castles are located near to a source of water. Qasr al Tuba is no exception; wells are located nearby, close to a dry river bed (“wadi”) and the site includes a dam and several wells.

Tuba is only accessible by 4WD along dirt tracks 50 km south of Hwy 40, or 35 km west of the Desert Highway. 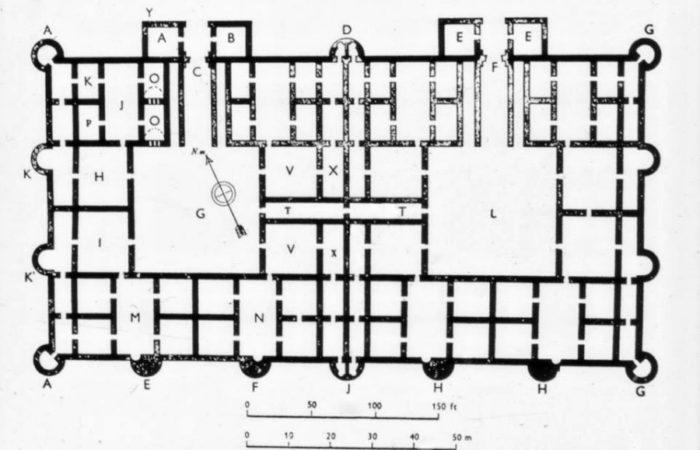 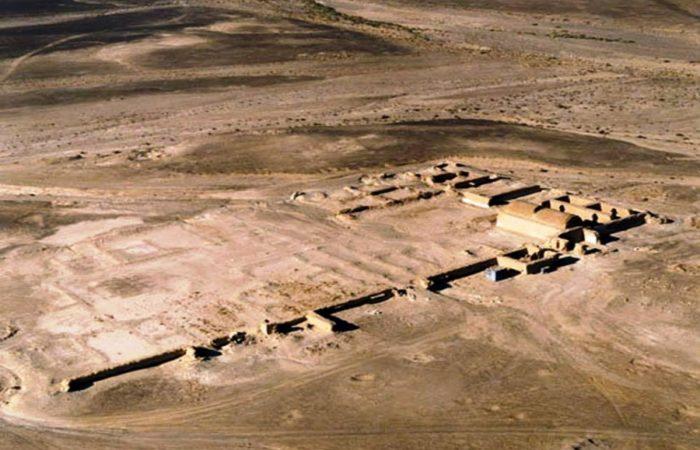 The upper part of walls was built of baked clay bricks of Muwaqqar chalk marl formation, whereas the lower part was built of limestone from the Umm Rijam formation on the eastern margins of the Jordanian desert. Pleistocene sediments cover the area around Qasr Tuba.

The surviving foundations and structures reveal its current layout as consisting of the west wing only; of an oblong enclosure measuring 140.50 by 72.85 meters (461 x 239 feet), almost a double square, It may in fact be regarded as two symmetrical enclosures, each a little over 70 meters square, connected by an internal corridor, which could be cut off when necessary.

The enclosure walls are supported by five semicircular towers on the south side, and by two on the east and west sides, in addition to which there was a round tower at each corner, except on the north side where the two gateways are flanked by two square rooms.

The northwestern section is nearly intact and several lengths of curtain-wall exist on the western side. A prayer chapel has also been identified on the site.

The surviving structures consist of ashlar masonry with baked brick and barrel-vaulted roofs. The lintels are decorated with rosettes, intertwined with plant leaves, which give the impression of fine lace work.

It is a prime example of an Umayyad construction of brick vaults set on brick walls.

The climate of wadi Al-Ghadaf is characterized as a Mediterranean, close to the arid / semiarid climate boundary. The climate is hot in summer and cold in winter. The temperature may reach more than 40°C during summer and drop a few degrees below zero in winter. 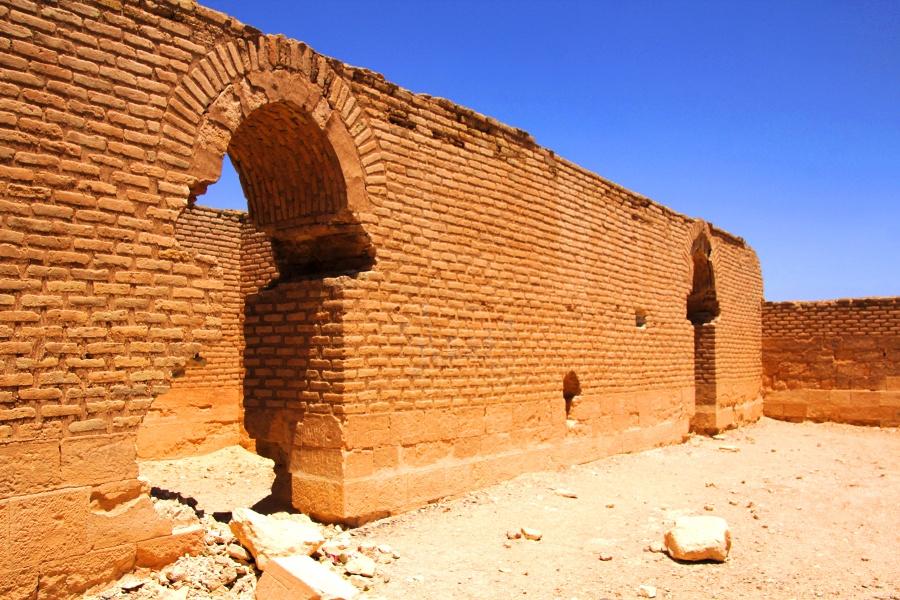 Qasr at-Tuba is the southernmost of the Umayyad desert castles in Jordan.
The unfinished Qasr al-Tuba believed to have been started under the patronage of Caliph Walid II ibn Yazid around 743-44 AD for his sons, al-Hakam and Uthman, and was almost certainly destined to be a caravanserai along established caravan route, it was initially intended to consist of two roughly 70-square-metre courtyard dwellings with projecting semicircular decorative towers, but the project was never completed. The structure appears to have been abandoned some time after the assassination of Caliph al Walid.
Qasr al-Tuba and Qasr al-Mushatta were both built under the patronage of Caliph Walid II ibn Yazid in the mid-700’s AD. They are grouped together because of their unusual architecture, being built of mud brick rather than limestone, with marble details and much more imaginative structural designs, and because they were the latest of the Umayyad castles, both left unfinished.

Qasr al-Tuba was probably built earlier than Mushatta, because it was more complete when it was abandoned. It sits at the bottom of Wadi al Ghadaf, one of the access routes from Wadi Sirhan onto the plateau. Qasr al-Tuba has three enormously deep wells, large pools for watering livestock, and a complex water-raising system unusual for that time period. It seems likely that Tuba was placed in Wadi al-Ghadaf late in the construction of the Umayyad network—it appears that the constructions fanned out southward from ‘Azraq progressively observing one after another of the outlets from Wadi Sirhan.

The desert castles are carefully situated at water sources and in the landscape to monitor important routes of transhumance, especially access to Damascus. If, for example, travelers come from the south, they would travel the Jauf-Wadi Sirhan route or the Ma’an-Amman route, on which they would face official observation from Umayyad cavalry. The southernmost patrol station, Qasr al-Tuba, is located exactly in the middle of these routes around 52 km. 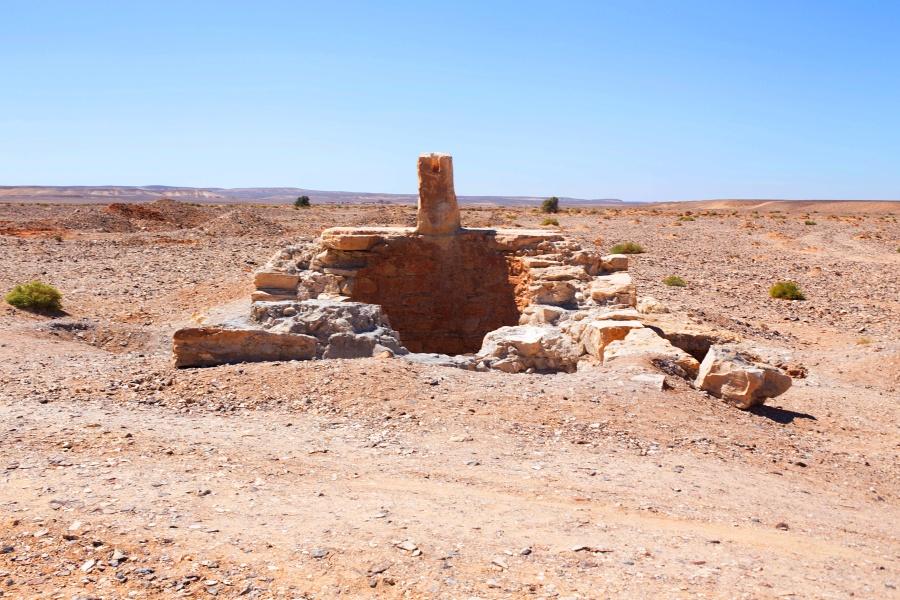 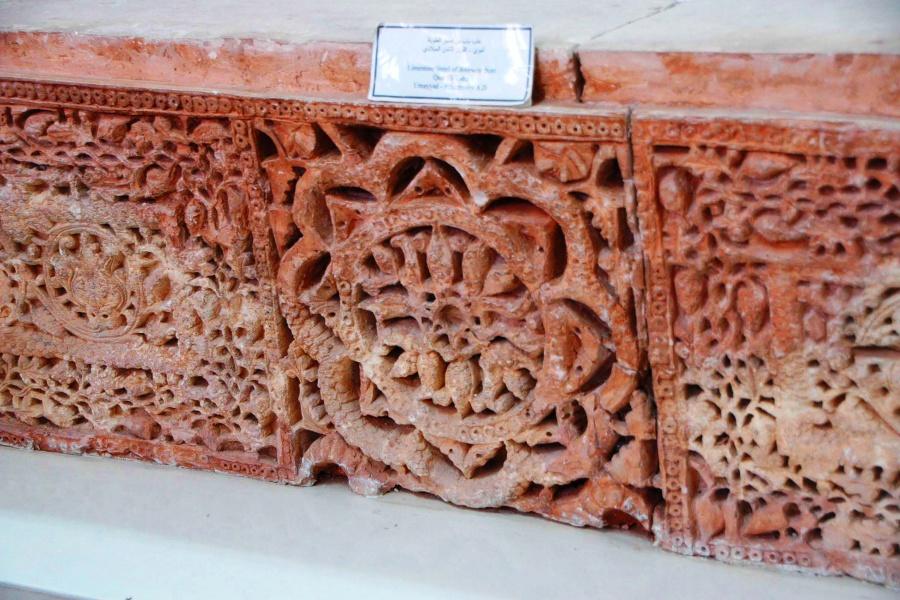 A door lintel, decorated with a very deep, undercut floral pattern comprising a central rosette flanked by intertwined foliage, scrolls filled with palmettes, pines and grapes, all arranged in a panel surrounded by pearling.
This type of floral pattern was very common during the Umayyad period and is seen throughout the decorative arts. Similar carved patterns adorned the Qasr al-Mushatta (now at the Pergamon Museum, Berlin).
The function of this lintel is purely aesthetic; it would reside on the upper part of a decorated doorway.
The lintel was a part of a building, dated approximately to the 2nd / 8th century; the date has also been established through historical inferences.
According to the Museum inventory number, the lintel was transferred from Qasr Tuba to the Museum during the 1950s by the Department of Antiquities of Jordan.
The provenance is known because this door lintel was found on the site of Qasr Tuba.