+962 7 9635 8199 info@jordan-travel.com
LoginSign Up
A landmark of Amman hailed for its grandiose blue dome, a memorial by the late King Hussein to his grandfather.

Was built by King Hussein bin Talal, who dedicated and named it after his grandfather, the first King of Jordan. Non-Muslims are welcome to enter the mosque, admire its lavishly decorated interior, or visit the museum within to see King Abdullah’s collection of personal items, as well as a display of ancient pottery and coins.

An example of contemporary Islamic architecture, the King Abdullah Mosque commemorates King Abdullah I, founder of the dynasty that rules Jordan to this day and the first King of Jordan. The vast blue dome, cavernous, 35m in diameter capped octagonal prayer hall, decorated with Quranic inscriptions, under which 3,000 Muslims may pray at once, shades a space that can hold over 10,000 prayer.
There is also a small women’s section for 500 worshipers and a much smaller royal enclosure, while a small museum celebrates the king’s life.

This is the only mosque in Amman that openly welcomes non-Muslim visitors. Thus King Abdullah Mosque is a “Must Visit” for anyone interested in the Jordanian royal family or contemporary Islamic architecture.

The King Abdullah Mosque stands about 3 kilometres east of Amman Citadel, in the heart of downtown Amman. It’s about 1 kilometre walk from the Abdali bus and service taxi station; just turn left onto King Hussein Street. 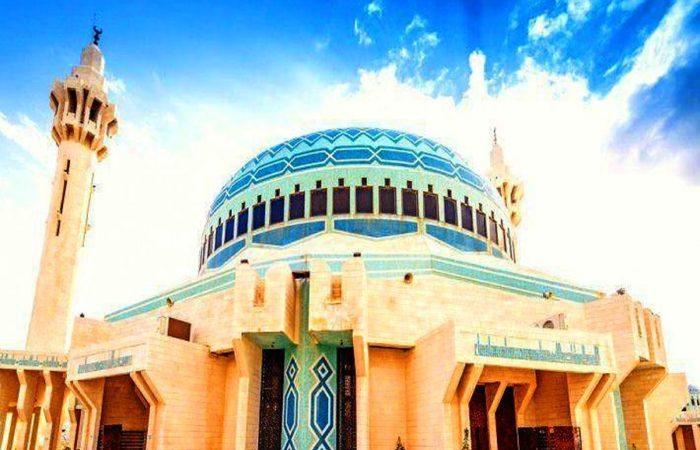 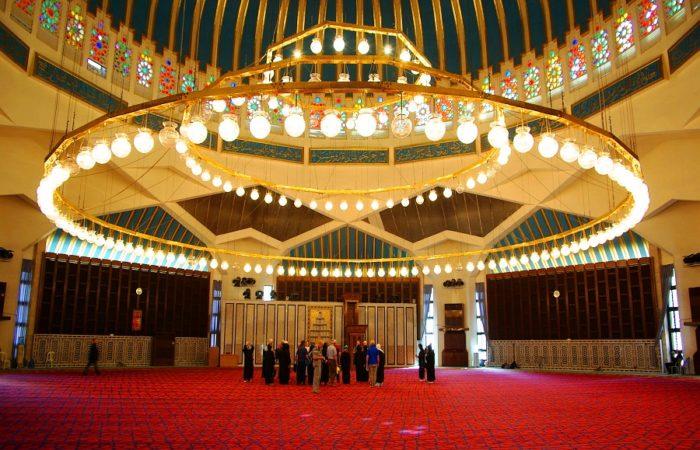 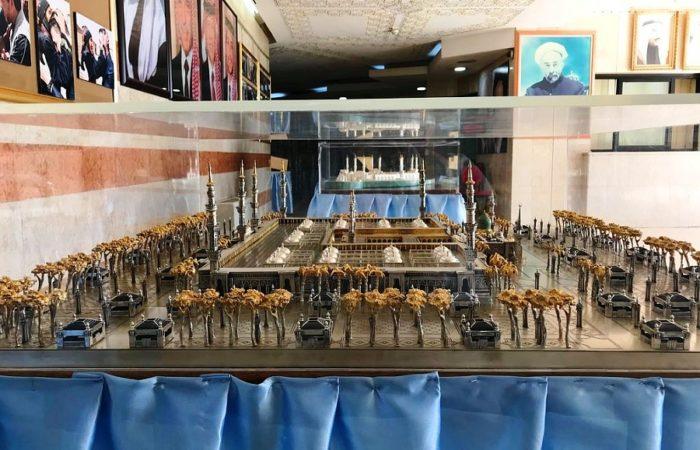 The mosque courtyard: symmetric octagonal shape with an area of 1615 m2 and accommodates (3000) worshipers covered with a dome over the entire area .
The dome with a diameter – 35 meters & a height of 31 meters, built without columns, but supported by the outer sides of the courtyard of the mosque.
The area is 2045 m2, and it is covered with a roofed portico of 1000 m2. Stone facade overlooking the courtyard of the mosque with Ayahat from Surat Al-Rahman inscriptions decorated.
Women’s prayer hall: has an area of 300 m2 and accommodates (500) worshipers.
The royal cabin: 250 m2, decorated with Islamic inscriptions, in the middle of its dome, a traditional copper chandelier.
The main events hall: accommodates 400 people. Fully equipped with air conditioning, audio translation, voting, television, sound/lighting and alarm systems.
The library: it has an area of 400 m2. Fully equipped and furnished. Has more than 20 000 Books.
Administration offices: total area of 200 m2.
Reception: area of 180 m2.
Dar Al-Quran (Hall for teaching Al-Quran): area of 80 m2.
Roofed-halls & Lounges: area of 900 m2.
The Islamic Museum: 150 m2 , has tow main areas; one includes the monuments and manuscripts of King Abdullah bin Al Hussein, the other, includes Islamic artifacts dating back to different Islamic eras in Jordan, in addition to pictures and models of Islamic archaeological sites in Jordan.
Charity market: 10 shops, with total area of 220 m2.
Other facilities like the exhibitions : The Hashemite reconstruction exhibition of Al-Aqsa Mosque Dome. And the Royal Commission of mosques and prophets shrines & tombs reconstructions.

Tourists are allowed to visit

King Abdullah Mosque This is the only mosque in Amman that openly welcomes non-Muslim visitors.
It is open to non-Muslims as visitors between Saturday and Thursday, in the morning and again around lunch time. On Friday, the Islamic day of worship, the mosque is open only to Muslims who wish to pray, while it sometimes closes for Muslim holidays and special events.