+962 7 9635 8199 info@jordan-travel.com
LoginSign Up
The most impressive monument of old Philadelphia

This magnificently restored theater is the most obvious and impressive remnant of Roman Philadelphia, and is the highlight of Amman for most foreign visitors. The theatre itself is cut into the northern side of a hill, and has a seating capacity of 6000. The best time for photographs is the morning, when the light is soft – although the views from the top tiers just before sunset are also superb.

Under Roman rule, Amman was chosen as the glittering capital of the Roman Empire, but the city was then called Philadelphia, after its Ptolemaic ruler, Philadelphus.

The theatre was built in the period 138-161 CE, which dates back to the reign of Roman emperor Antoninus Pius. The sole centerpiece of the city, the magnificent masterpiece was designed to be northerly-oriented, to keep the sun off its spectators, and could seat up to 6,000 people on its steep stairs.

Like any other Roman Theatre in the world, it was constructed upon the same three building blocks: the cavea, the orchestra and the scaenae frons. The cavea is nothing more than the seating space that contained the largest number of spectators. The highest rank was known as ‘the gods’; although far from the stage, this section offered a good view, thanks to the lofty position and steepness of the stairs. The orchestra, on the other hand, is the area directly in front of the stage, reserved for VIPs to ensure they didn’t miss a split second of the action. The two stories rising from the stage upwards are the saenae fons, and were used as a backstage space of sorts. 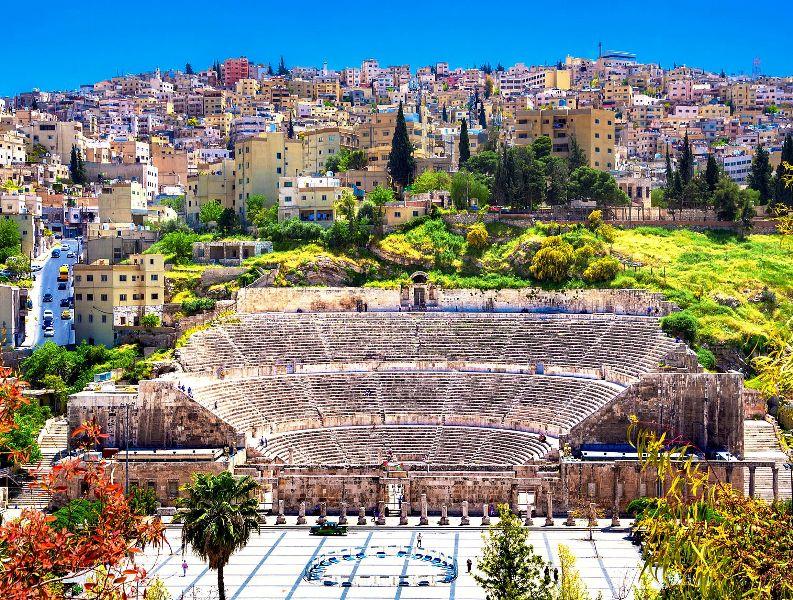 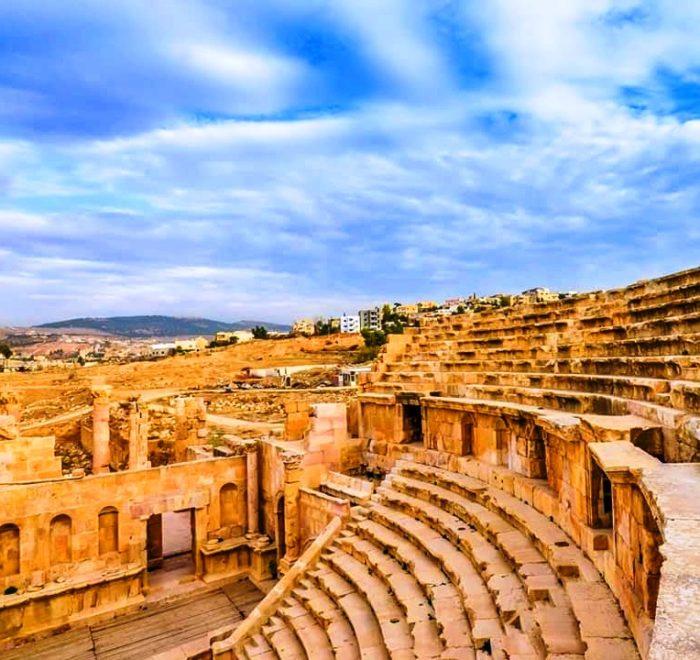 The government of Jordan started restoring the theatre in 1957. unfortunately, none of the original material was used in the process, yet the final outcome is certainly impressive.

Today, the Roman Theatre is again in use for performances, concerts, and events. In addition, halls on both sides of the stage house two small heritage museums: The Folklore Museum and the Museum of Popular Traditions.

The row of columns in front of the theatre is what remains of the colonnades which flanked the Roman Forum, a public square, once among the largest of the Empire (100 x 50 metres). East of it is the Odeon, a smaller Roman auditorium for musical performances.

The Roman Theatre is always open for visitors, and also hosts many local events such as Al-Balad Music Festival. So be sure not to miss out on this dreamy combination of history and art.

The cavea, the semicircular seating space carved into the Jabal Al-Jofeh hill in three horizontal sections with a total of 44 rows can seat around 6,000 people. It faces north so that the audiences are protected from the sun. Social rank dictated the places for the audience. The urban poor, foreigners, slaves, and women were restricted to the upper section.