One of the best-known of the desert castles, imposing and well preserved Umayyad building in the vastness of the Jordanian desert can be dated before 710 AD, due to an Arabic inscription above one of the doors of a room.

Qasr Al-Kharanah, or it might be found as Qasr al-Harrana, Qasr Kharanah, or just Kharaneh/Hraneh, Located in the middle of a vast, treeless plain, this imposing thick-walled structure was the most likely inspiration for the ‘desert castle’ moniker and is arguably the most photogenic of all the desert castles.
It’s about 60 kilometres east of Amman and relatively close to the border with Saudi Arabia. Kharana is 16km further west along Hwy 40 from Qusayr Amra.
There’s no available public transport along the highway. It’s easier to spot than neighbouring Amra.

Named after the harra (surrounding gravel plains), Kharana lords imposingly over a harsh and barren moonscape that appears inhospitable for human habitation.
Inside, however, the internal courtyard provides a calm, protected space that even the wind fails to penetrate. 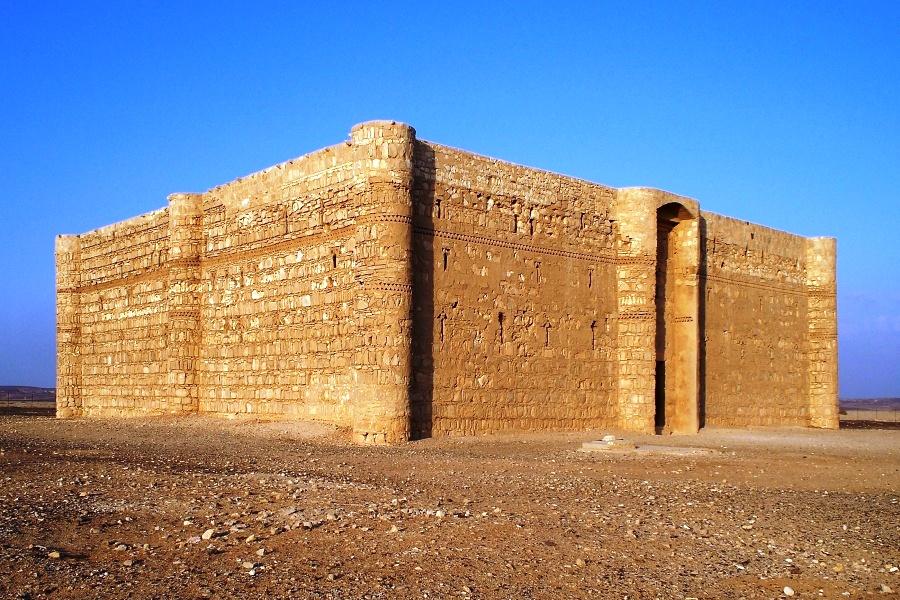 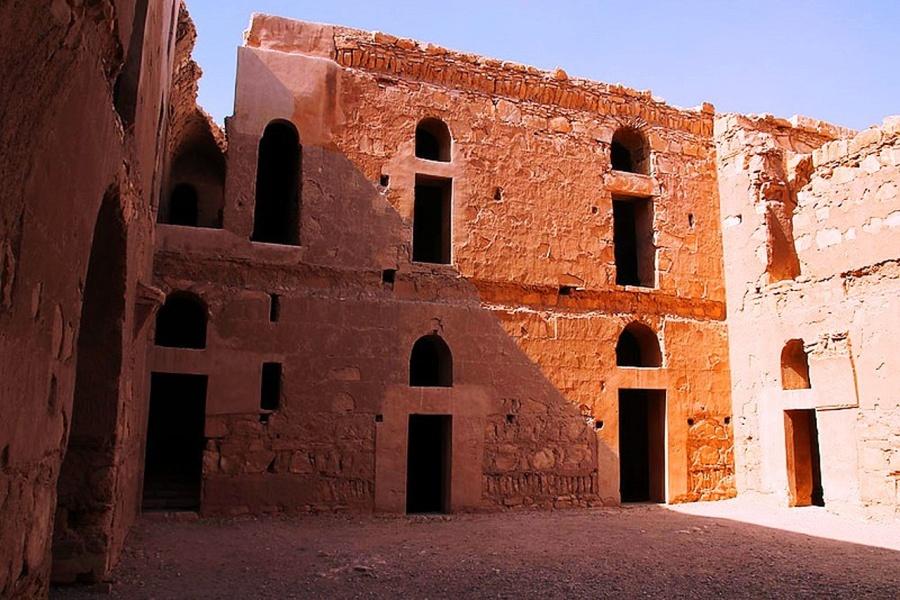 The building is a square 35 metres (115 ft) on each side, with small projecting corner towers and a projecting rounded entrance on the south side. It is made of rough limestone blocks set in a mud-based mortar. Decorative courses of flat stones run through the facing.

On the inside the building has 60 rooms on two levels arranged around a central courtyard, with a rainwater pool in the middle, probably served as meeting spaces for visiting delegations.
The long rooms either side of the arched entrance were used as stables, and in the centre of the courtyard was a basin for collecting rainwater. Remarkably, the interior is much smaller than you’d imagine as the walls are deceptively thick.
Many of the rooms have small slits for light and ventilation. Some of the rooms are decorated with pilasters, medallions and blind niches finished in plaster. 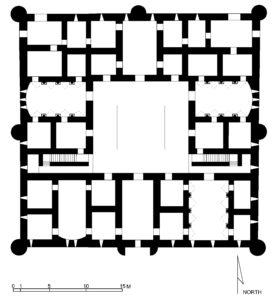 The austere presence of its exterior is complemented by the starkness of its internal organization. Two vaulted chambers that functioned as stables and storage areas frame the entrance hall of the Qasr at either side.

The corridor concludes in a central courtyard, which is bordered by three suites of rooms on the ground level and five on the upper floor.

The rooms on the second floor contain nearly all and certainly the most pronounced decorative detail in the building featuring stucco moldings, sculpted plaster roundels, and both closed and open arcades.

Download full description of The Development of Structural Concept and Architectural Form in Qasr Kharana by Ilayan, J.S.A. here. 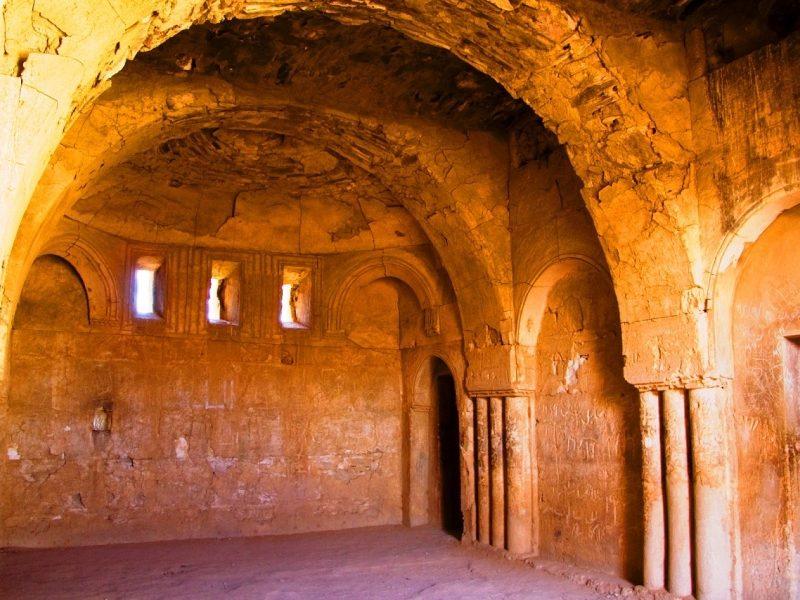 It is believed to have been built sometime before the early 8th century AD, based on a graffito in one of its upper rooms, despite visible Sassanid influences. A Greek or Byzantine house may have existed on the site. It is one of the earliest examples of Islamic architecture in the region. Its purpose is hard to ascertain with any degree of certainty. While scholarship has suggested that Qasr Kharana might have served a variety of defensive, agricultural and/or commercial agendas similar to other Umayyad palaces in greater Syria, new research posits that it could be a product of Sufyanid rule where it’s argued tribal political leadership prevailed. Such a hypothesis proposes that Qasr Kharana dates from the early Umayyad period (inscriptional evidence confirms a date prior to 710 AD) and functioned strictly to provide a private and protected backdrop for political meetings between tribal communities and government representatives from Damascus. The remote yet highly visible location, coupled with the layout and organization of the building, speak to such a use as Qasr Kharana contains groups of rooms whose differentiation is vaguely discernible, designated areas for stables and storehouses, and a meeting hall.

Qasr Kharana combines different regional traditions with the influence of the then-new religion of Islam to create a new style. Syrian building traditions influenced the design of the castle, with Sassanid building techniques applied.

The site made it necessary to modify those building techniques slightly. The arches are not connected to the carrying wall, instead placed on bearing arms. The overall weight of the structure keeps these elements together. Some newer building materials, such as wooden lintels, were used, allowing the building to be more flexible and resist earthquakes.

Islamic concepts of public and private were satisfied through the narrow slits offering views to (and from) the outside, larger windows on the inside and the north terrace separating the two apartments. A room on the south side was set aside for prayer.

The wall slits could not have been used by archers as they are the wrong height and shape. Instead they served to control dust and light and took advantage of air pressure differentials to cool the rooms, via the Venturi effect.

The architectural style and the decoration of the building show influences from Syrian, Parthian, and Sasanian traditions. Some scholars argue that structure was built during the Sasanian occupation of the area in 620s. 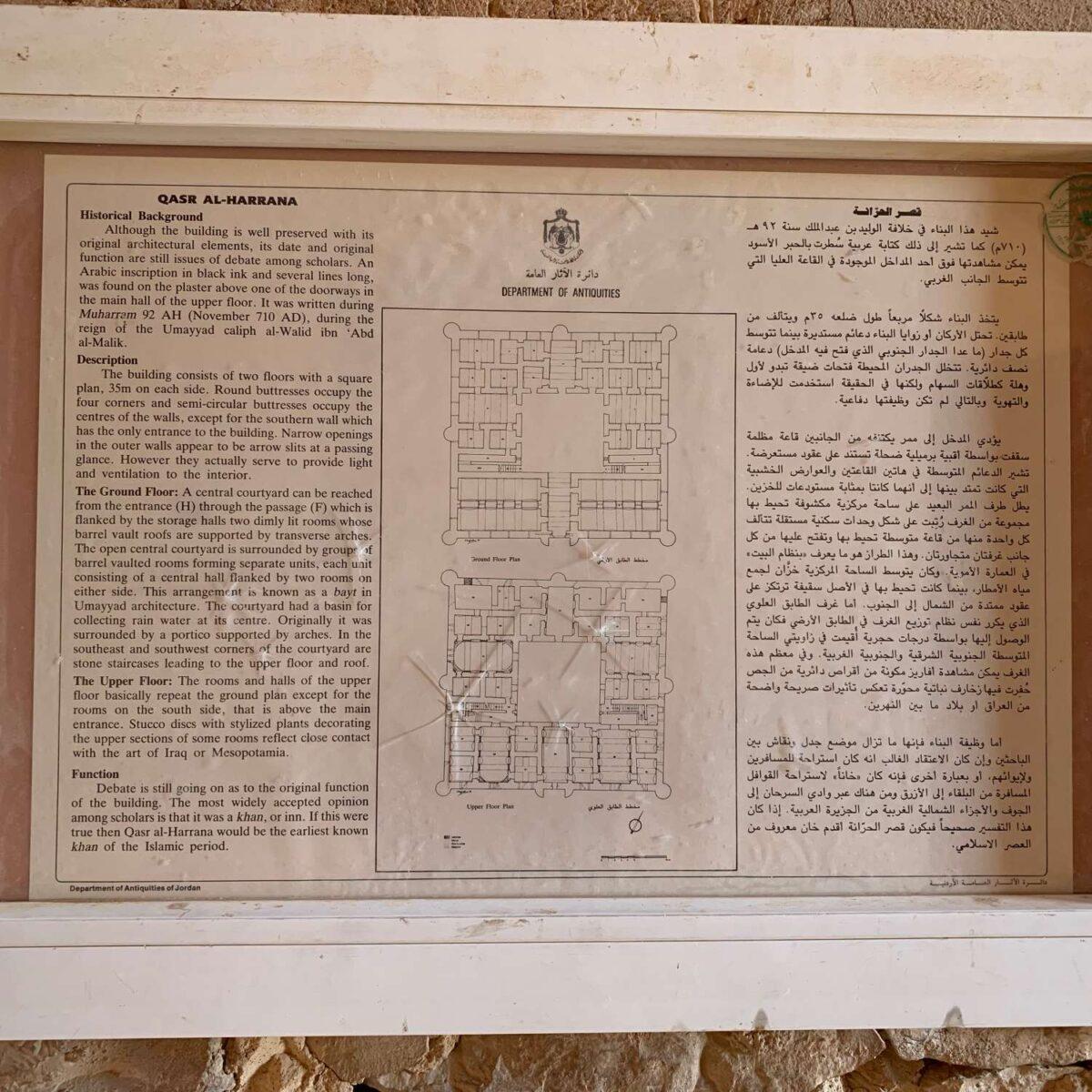 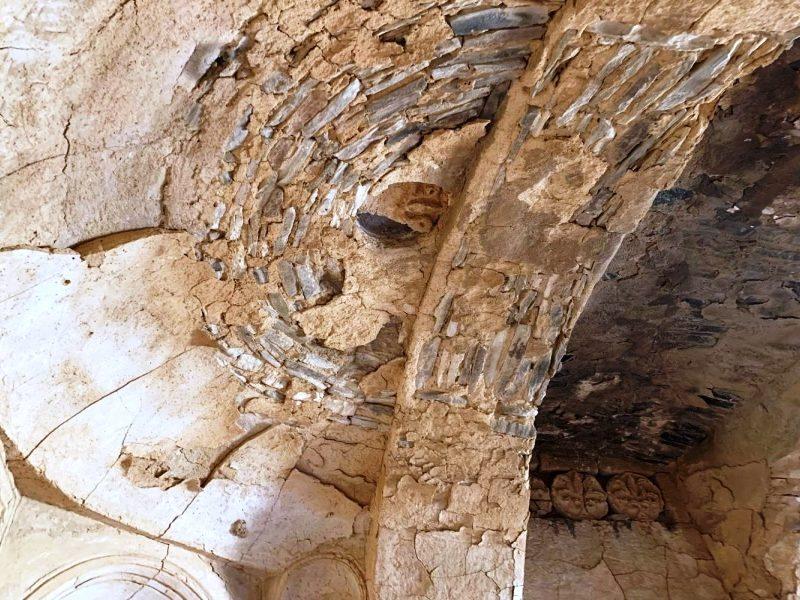 The area is fenced off with a visitors’ center on the southeast corner, where the main entrance to the castle area is located. An unpaved driveway leads from the highway to a dirt parking lot large enough for cars and several buses located just south of the entrance.

The castle is today under the jurisdiction of the Jordanian Ministry of Antiquities. The kingdom’s Ministry of Tourism controls access to the site via the new visitor’s center, charging an admission fee of JD 2 to the site during daylight hours. Public toilets are available.
The hospitable owner of the adjacent Bedouin tent is also allowed to sell handcrafts and drinks in the parking lot, which doubles as the site coffeehouse and souvenir stall, will brew you fresh mint tea and take time to discuss the issues of the day.

Inside, a large interpretive plaque in Arabic and English is located just inside the main entrance. Visitors are free to explore the entire building, although some of the corridors overlooking the courtyard on the second story do not have guardrails and those who walk there must be careful.