The largest and most impressive of the Umayyad palaces, the unfinished, tawny-toned limestone and brick complex, that includes an entrance hall, mosque, an audience hall, and residential quarters.
One of the grander examples. They seem to have had a number of roles, probably including political and military control of the local area, and pleasure in the form of hunting.

Qasr Al-Mshatta, where Qasr means Palace and Mshatta literally means Winter, so the palace most likely has been used as a Winter residence or rest place.
It is reliably dated on both historical and stylistic grounds: it is a well-documented fact that al–Walid II (r. AH 125–6 / AD 743–4) built extensively in the area and that his building program ceased after his death. On the basis of stylistic analysis, certain characteristics such as the building techniques used, the interior arrangement and the decoration of the complex, mean that it can be attributed to the reign of Al-Walid II.

As Creswell and Allan (1989) pointed out, the mixture of brick and stone in architecture, whereby the bricks are much thicker than the stone joints, is an innovation of the Muslim architects. In addition to that, the pointed arches, whereby the two centres are one-fifth of the span, cannot be earlier than the 2nd / 8th century. Moreover, the location of the mosque, being to the right of the entrance, is similar to that of the Palace of Ukhaidir in Iraq built between 157–8 / 774–5 by the Abbasid Caliph al-Mansur (93–158 / 712–5). 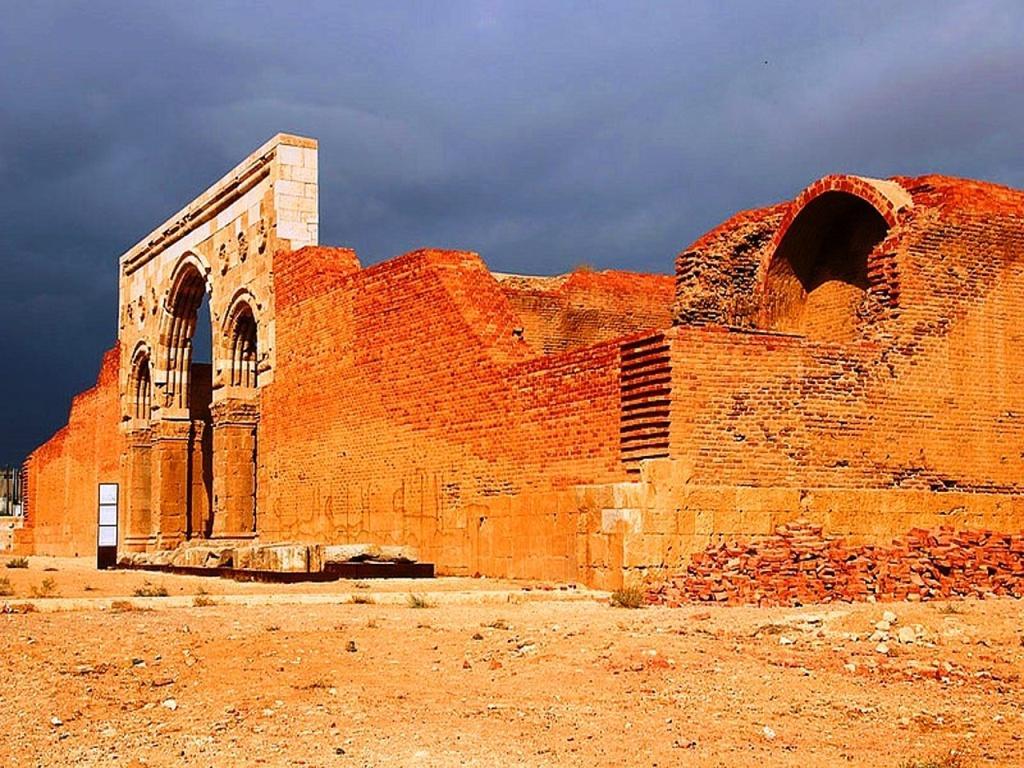 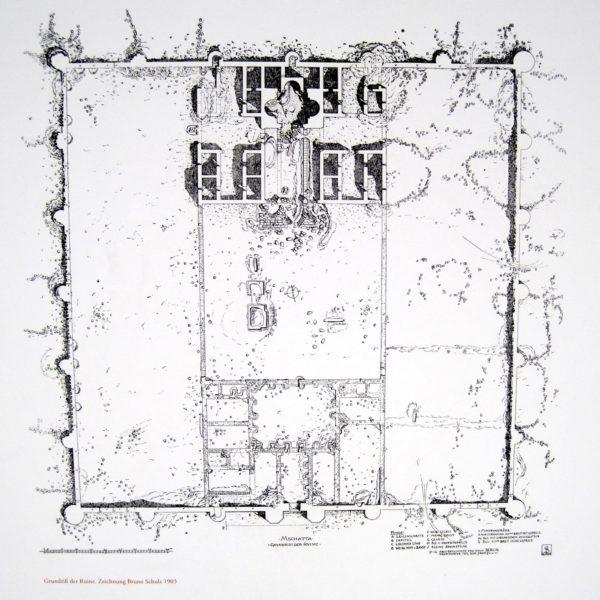 It is the largest Umayyad palace in Jordan and lies 25 kilometres south of Amman and 20 kilometres east of Madaba.
A combination of limestone and brick was used in the construction of al-Mshatta, which was used to commemorate the caliph’s authority.
It consists mainly of the entrance hall, a mosque (with a mihrab still visible), an audience hall and some residential quarters.
The living quarters comprise residential suites organized around central courtyards. The sides of the palace are 144 meters long and it is surrounded by an outer wall measuring 3-5.5 meters high with 25 towers, among which there are four round corner-towers and two octagonal ones flanking the main gate.

The foundations and the lowest layer sof the exterior structures are made of stone, while the upper courses and the roofing of the interior are made of brick. Archaeologists suggest that the building was never completed.

Some of the palace sections are still at foundation level, particularly at the southern end. This may have been due to the political turbulence of that period, when the Abbasids overthrew the Umayyads and moved the capital to Baghdad. 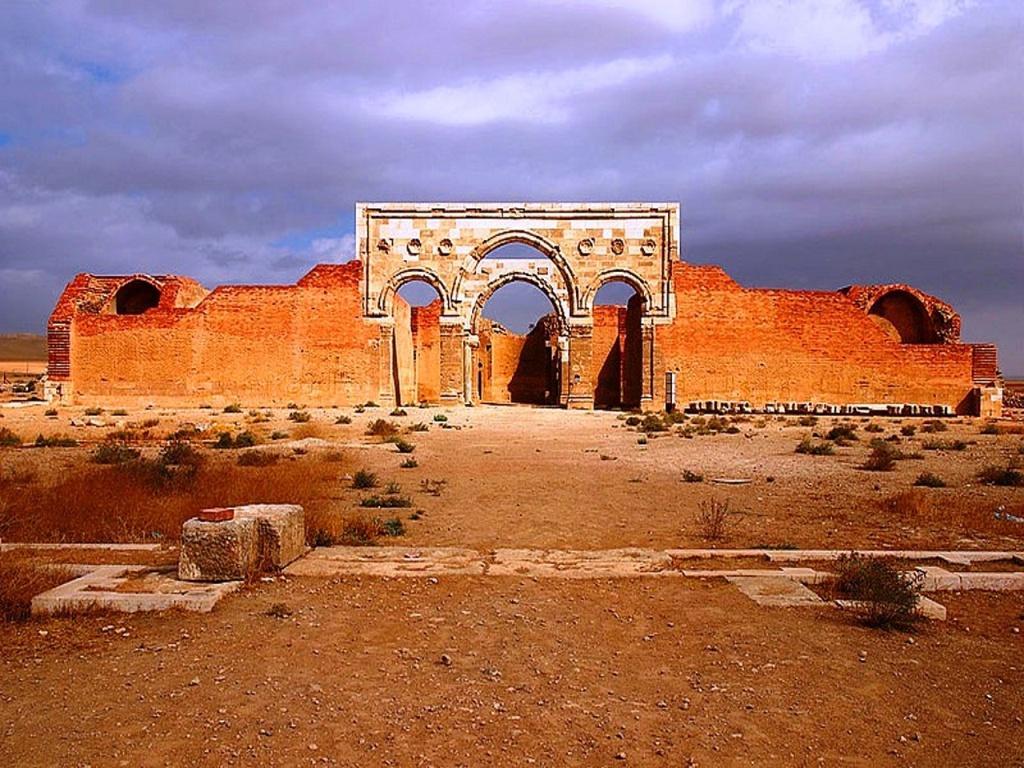 The palace is divided into three sections, although only the middle part was actually built, with its northern half fully completed. The other two sections, the eastern and the western, were abandoned before completion.

The middle section contains the most important parts of the palace, such as the throne room and its associated structures.
A triumphal arch standing on four pillars, with a central arch span of over 6.5 m acted as the entrance to this section. Three rosettes decorated the upper part of the side arches.

A 27 metre-long vaulted tripartite hall linked the arches to the throne room, which has a brick dome and is surrounded by four compounds for the royal household and for domestic use.
Each compound comprises two barrel-vaulted suites lit by two oculus windows, and shares a courtyard with another compound.
This layout is based on a classical model that goes back to the 3rd century AD, and reflects a common floorplan followed in civilian Umayyad buildings that survive in Syria today.

Al-Mushatta is considered a showcase of early Islamic stone and carved plaster work with floral, animal and geometric motifs.
The facade of the southern exterior has a 1.20 m high richly decorated frieze with moldings of pairs of interlacing vine-stalks, forming a loop that includes a vine leaf and a bunch of grapes. Above this frieze there is a 2.85 m high panel decorated with a zigzag pattern, forming large triangles with rosettes in the centre and a combination of lotuses and pine cones. The rosettes are surrounded by carvings of vines, humans and animals (e.g. lion, parrot, buffalo, griffin, oxen, as well as mythical creatures like a dog-bird and a lion with a human head).

The Palace has Byzantine and Sassanian influences in the brickwork as well as in the layout and design.
Many of its decorative features contain Persian and Sassanian mythical animals and Coptic iconography suggesting that craftsmen were brought here from Persia and Egypt. 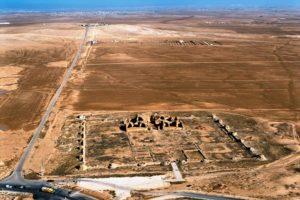 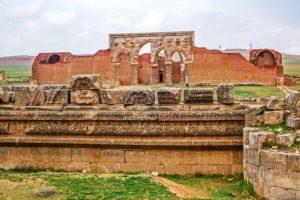 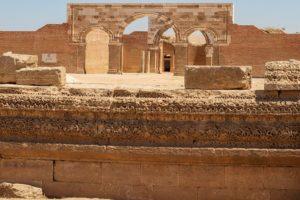 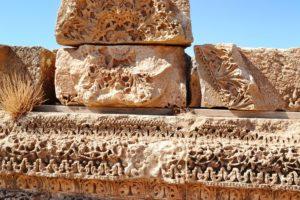 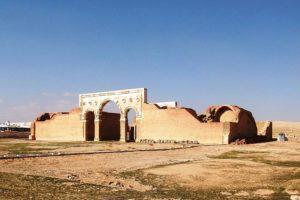 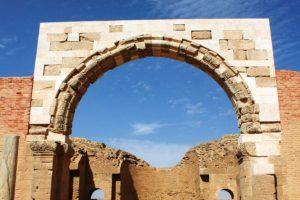 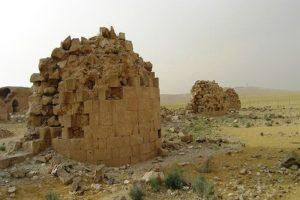 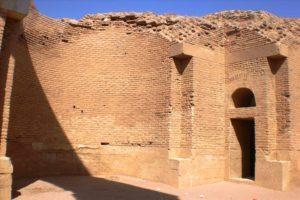 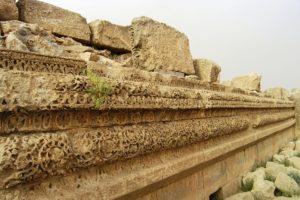 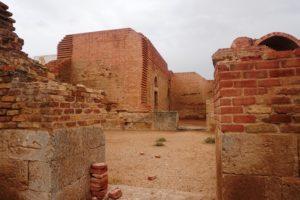 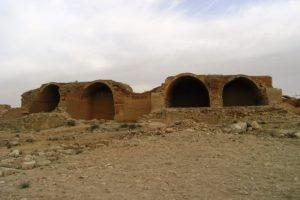 A gift to Kaiser Wilhelm by Ottoman sultan Abd al-Hamid 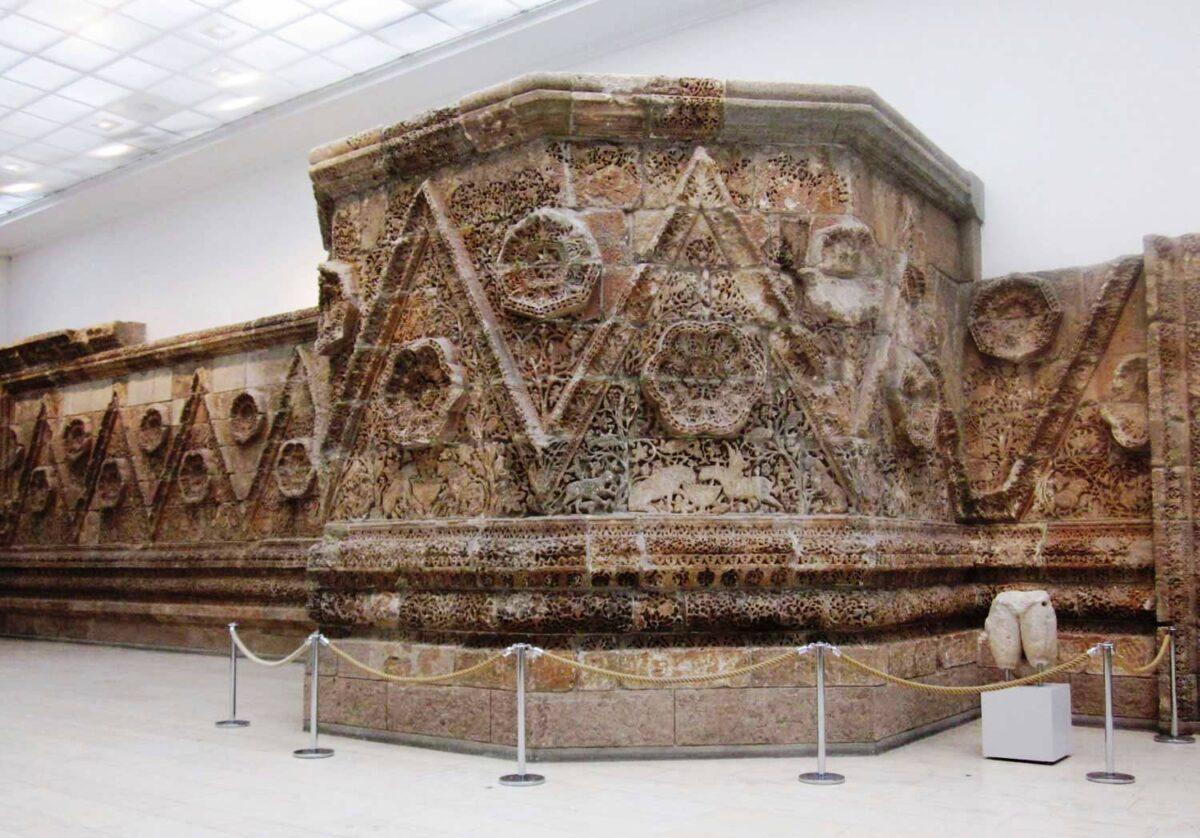 The most beautiful feature of Mshatta, however, remains in the rich and intricately carved features on its southern exterior, a significant section of which was given to Kaiser Wilhelm as a gift from the Ottoman sultan ‘Abd al-Hamid just before World War I and today is located in the Pergamon Museum in Berlin.

The facade consists of a zigzag pattern creating a panel of triangular forms, each framing a rosette surrounded by a completely carved surface of interwoven vines, animals and humans, including lions, buffalo, and parrots.
The panel stands almost 3 meters in height and 2.5 meters in width.

It has been suggested that craftsmen were conscripted from Iran and Egypt because of the use of Persian, Sassanian influenced mythic animals and Coptic iconography inspired by vine and rosette ornamentation.