One of the best-preserved desert buildings of the Umayyads, the Unesco World Heritage Site of Qusayr Amra is the highlight of a trip into the Eastern Desert. Part of a much greater complex that served as a caravanserai, bathhouse and hunting lodge, the qusayr (little castle) is renowned for its rather risqué 8th-century frescoes of wine, women and wild times.

Qasr Amra Located beside Wadi Al-Butum, on the north side of Jordan’s Highway 40, roughly 85 kilometres from Amman and 21 kilometres southwest of Al-Azraq.

It was built some time between 723 and 743, by Walid Ibn Yazid, the future Umayyad caliph Walid II, whose dominance of the region was rising at the time. It is considered one of the most important examples of early Islamic art and architecture. 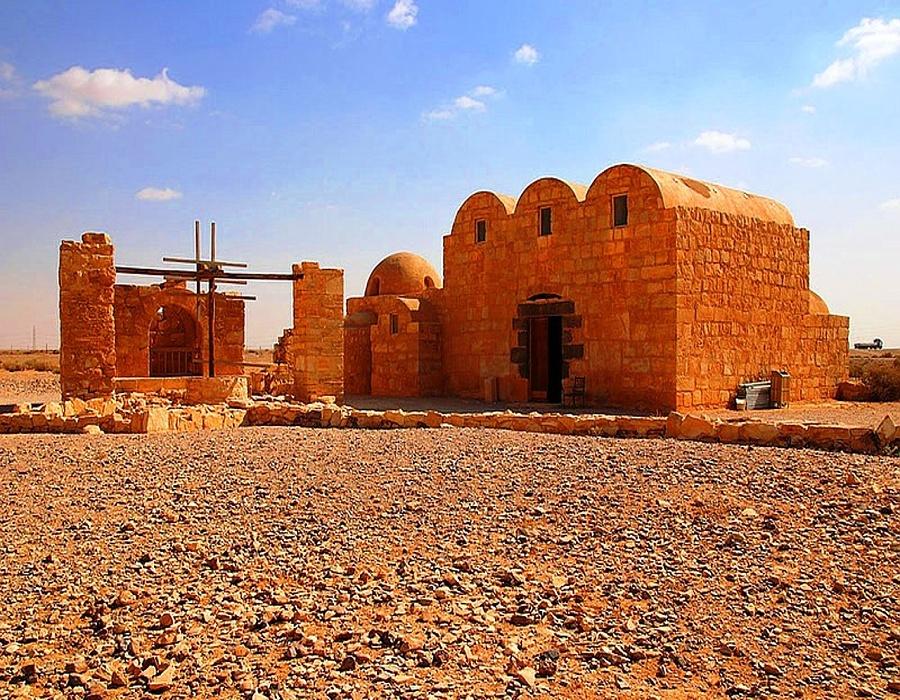 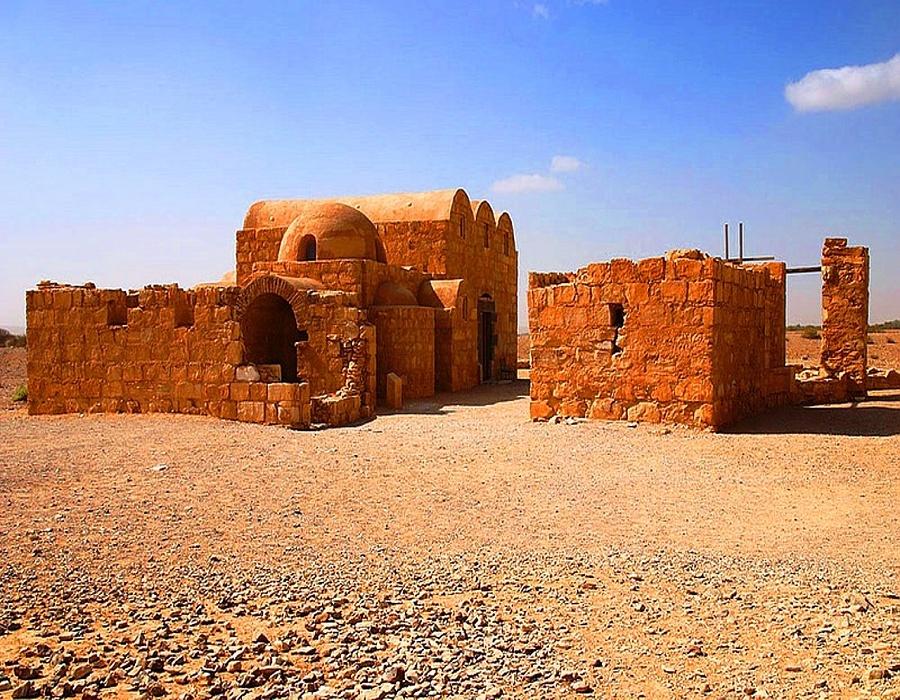 The building is actually the remnant of a larger complex that included an actual castle, meant as a royal retreat, without any military function, of which only the foundation remains. What stands today is a small country cabin. It is most notable for the frescoes that remain mainly on the ceilings inside, which depict, among others, a group of rulers, hunting scenes, dancing scenes containing naked women, working craftsmen, the recently discovered “cycle of Jonah”, and, above one bath chamber, the first known representation of heaven on a hemispherical surface, where the mirror-image of the constellations is accompanied by the figures of the zodiac. This has led to the designation of Qusayr ‘Amra as a UNESCO World Heritage Site. The bathhouse is also, along with examples in the other desert castles of Jordan, one of the oldest surviving remains of a hammam in the historic Muslim world.

That status, and its location along Jordan’s major east–west highway, relatively close to Amman, have made it a frequent tourist destination.

The main entry vault has scenes of hunting, fruit and wine consumption, and naked women. Some of the animals shown are not abundant in the region but were more commonly found in Persia, suggesting some influence from that area. One surface depicts the construction of the building. Near the base of one wall a haloed king is shown on a throne. An adjoining section, now in Berlin’s Pergamon Museum, shows attendants as well as a boat in waters abundant with fish and fowl.

Things To Do in Aqaba

To Do in Aqaba

The History of Aqaba

Excavations at Tall Hujayrat Al-Ghuzlan and Tall Al-Magass in Aqaba revealed that the city has been an inhabited settlement since 4000 BC, with a thriving copper production on a large scale. This period is largely unknown due to the absence of written historical sources. Archaeologists from University of Jordan have discovered the sites, where they found a small building whose walls were inscribed with human and animal drawings, suggesting that the building was used as a religious site. The people who inhabited the site had developed an extensive water system in irrigating their crops which was mostly grapes and wheat. Several different-sized clay pots were also found suggesting that copper production was a major industry in the region, the pots were used in melting the copper and reshaping it. Scientific studies performed on site revealed that it had undergone two earthquakes, with the latter one leaving the site completely destroyed.

The Edomites, who ruled over Edom just south of the Dead Sea, are believed to have built the first port in Aqaba called Elath around 1500 BC, turning it into a major hub for the trade of copper as the Phoenicians helped them develop their maritime economy. They profited from its strategic location at the junction of trading routes between Asia and Africa.

Around 735 BC, the city was conquered by the Assyrian empire. Because of the wars the Assyrian empire had in the east, its trading routes were diverted to the city and the port witnessed relative prosperity. The Babylonians conquered it in 600 BC. During this time, Elath witnessed great economic growth, which is attributed to the business background of its rulers who realized how important the city’s location was. The Persian Empire took the city in 539 BC.

Aqaba Church, considered to be the world’s first purpose-built church.
The city continued to grow and prosper which made it a major trading hub by the time of the Greek rule by 300 BC, it was described by a Greek historian to be “one of the most important trading cities in the Arab World”. The Ptolemaic Greeks called it Berenice. The Nabatean kingdom had a large population north of the city, the ones who had built Al-Khazneh in the city of Petra, they outnumbered the Greeks which made the capture of the city easy. One of the oldest known texts in Arabic alphabet is an inscription found in Jabal Ram 50 kilometres (31 miles) east of Aqaba.

Both Petra and Aela were under strong Nabatean influence despite Roman rule. Aela reached its peak during Roman times, the great long distance road the Via Traiana Nova led south from Bostra through Amman, terminating in Aela, where it connected with a west road leading to Philistia and Egypt. Around AD 106 Aela was one of the main ports for the Romans. It was the home origin of what came to be known as the Ayla-Axum Amphoras. By the time of Eusebius, Aela became the garrison of the Legio X Fretensis, which was moved to Aela from Jerusalem.

Aela came under Byzantine Empire rule in AD 300, where the Aqaba Church was constructed, considered to be the world’s very first purpose-built church. The city became a Christian bishopric at an early stage. Its bishop Peter was present at the First Council of Nicaea, the first ecumenical council, in 325. Beryllus was at the Council of Chalcedon in 451, and Paul at the synod called by Patriarch Peter of Jerusalem in 536 against Patriarch Anthimus I of Alexandria, a council attended by bishops of the Late Roman provinces of Palaestina Prima, Palaestina Secunda and Palaestina Tertia, to the last-named of which Aela belonged.

According to Ibn Ishaq, Muhammad himself in the Expedition to Tabouk of 630 reached, and extracted tribute from, Aila. Aila fell to the Islamic conquest by 650, and the ancient settlement was left to decay, while a new Arab city was established outside its walls under Uthman ibn Affan., also known as Ayla (Arabic: آيلة‎). The geographer Shams Eddin Muqaddasi describes Ayla as nearby the ruined ancient city.

Aqaba Fortress
The city prospered from 661 to 750 under the Ummayads and beyond under the Abbasids (750-970) and the Fatimids (970-1116). Ayla took advantage of its key position as an important step on the road to India and Arab spices (frankincense, myrrh), between the Mediterranean Sea and the Arabian Peninsula. The city is also mentioned in several stories of the Arabian Nights.

The medieval city was excavated in 1986 by a team of the University of Chicago. Artefacts are now on exhibit at Aqaba Archaeological Museum and Jordan Archaeological Museum in Amman. The city was inscribed in a rectangle 170 × 145 fortified meters, with walls 2.6 meters thick and 4.5 meters high, surrounding a fortified structure, occupying an area of 35 × 55 meters. 24 towers defended the city. The city had four gates on all four sides, defining two main lines intersecting at the center. The intersection of these two channels was indicated by a tetra pylon (a four-way arch), which was transformed into a luxury residential building decorated with frescoes of the tenth century. This type of urban structure, called MSIR, is typical of early Islamic fortified settlements.

Baldwin I of Jerusalem took over the city in 1116 without much resistance. The center of the city then moved to 500 meters along the coast to the south, and the crusader fortress of Helim was built, as well as Pharaoh’s Island (now in Egyptian territorial waters about 7 kilometres (4 miles) west of Aqaba). The city declined in the late 12th century due earthquakes and attacks by Bedouins and Mamluks forces.

Ayla remained under the control of the kingdom of Jerusalem from 1116 until 1187, when it was captured by Saladin. The settlement by this point had essentially disappeared, and the site became known after the nearby mountain-pass, as al-ʿAqaba. The old fort was rebuilt, as Aqaba Fortress, by sultan Al-Ashraf Qansuh Al-Ghuri in the early 16th century. For the next four centuries, the site was a simple fishing village of little importance.

During World War I, the Ottoman forces were forced to withdraw from Aqaba in 1917 after the Battle of Aqaba, led by T. E. Lawrence and the Arab forces of Auda abu Tayi and Sherif Nasir. The capture of Aqaba allowed the British to supply the Arab forces.

In 1918, the regions of Aqaba and Ma’an were officially incorporated into the Kingdom of the Hejaz. In 1925, Ibn Saud the ruler of Nejd with the help of his Wahhabi Ikhwan troops successfully annexed the Hejaz, but gave up the Ma’an and Aqaba to the British protectorate of Transjordan.

In 1965, King Hussein, through an exchange deal with Saudi Arabia, gave 6,000 square kilometres (2,317 square miles) of desert-land in Jordanian territories in exchange for other territories, including 12 kilometres (7 miles) of an extension of prime coastline south of Aqaba, which included the magnificent Yamanieh coral reef. Aqaba was a major site for imports of Iraqi goods in the 1980s until the Persian Gulf War.

The city of Aqaba has one of the highest population growth rates in Jordan in 2017, and only 44% of the buildings in the city had been built before 1990. A special census for Aqaba city was carried by the Jordanian department of statistics in 2007, the total population of Aqaba by the census of 2007 was 98,400. The 2017 population estimate is 198,500. The results of the census compared to the national level are indicated as follows:

Religion
ِIslam represents the majority of the population of Aqaba, but Christianity still exists today. Approximately 5,000 Christian families live in the city. There are several churches in the city and one Christian school called Rosary Sisters School Aqaba.

Skyline of Aqaba
Residential buildings in Aqaba are made up of 4 stories, of which are covered with sandstone or limestone. The city has no high-rises; however, Marsa Zayed project is planned to dramatically change that reality through the construction of several high-rise towers that host hotels, residential units, offices and clinics. 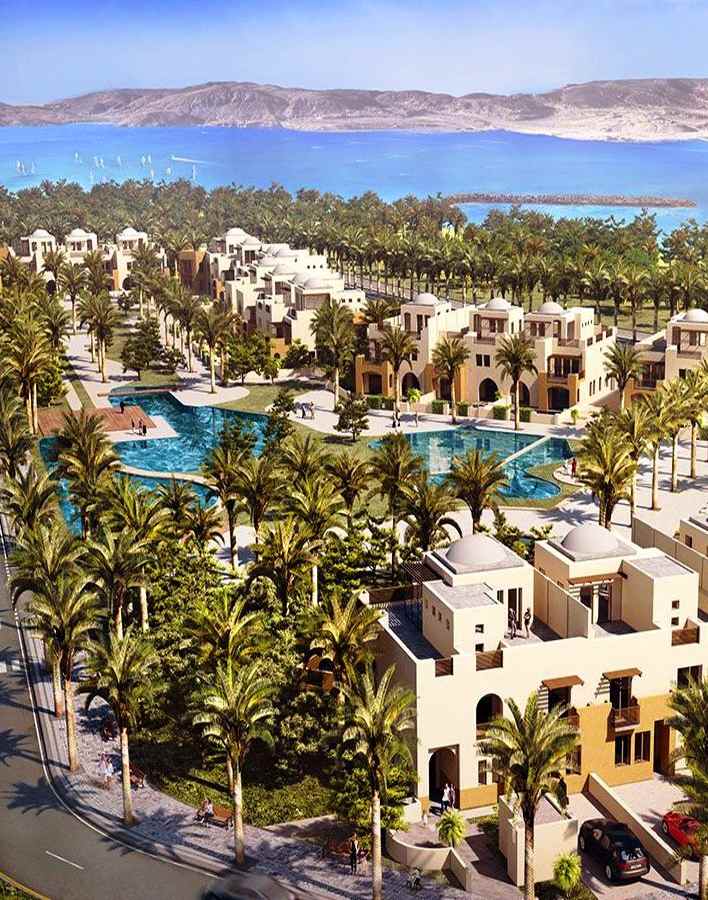