+962 7 9635 8199 info@jordan-travel.com
LoginSign Up
A form of an Islamic fortress with fabulous design of imitating the style of distinct Islamic architecture.

King Hussein Bin Talal Mosque, better known as the King Hussein Mosque, is the largest (60,000 m2) mosque in Jordan. Not to be confused with the 1924 Grand Al-Husseini Mosque,  in Downtown Amman.

A combination of modernity & originality in the prominent Islamic inscriptions at the walls, arches and floors, to be a reminder of the Hashemite interest to architecture and art.

King Hussein Bin Talal Mosque was built in 2005 in the reign of King Abdullah II in West Amman- Dabouq area, specifically in Al Hussein Public Parks at King Abdullah II Street near King Hussein Medical Center. Overlooking Amman and the Wadi Al-Seer Mountains, where it is seen from most areas of Amman Parts.

It is square shape and features four minarets and marble floors, His Majesty King Abdullah II, at the end of 2005 AD ordered to start building to commemorate the late King Hussein, on a land of 60,000 square meters for about 5,500 worshipers.
The building area is in about 8000 m2, the parking spaces allows to have 450 vehicles in. The area provided with internal streets, paths, sidewalks, stairways, and cultivated basins, surrounded by green spaces.

The mosque has 3 floors, the ground, the first and the mezzanine floor. 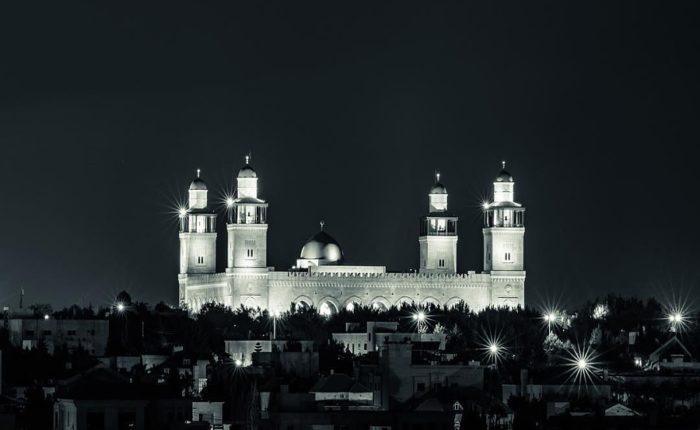 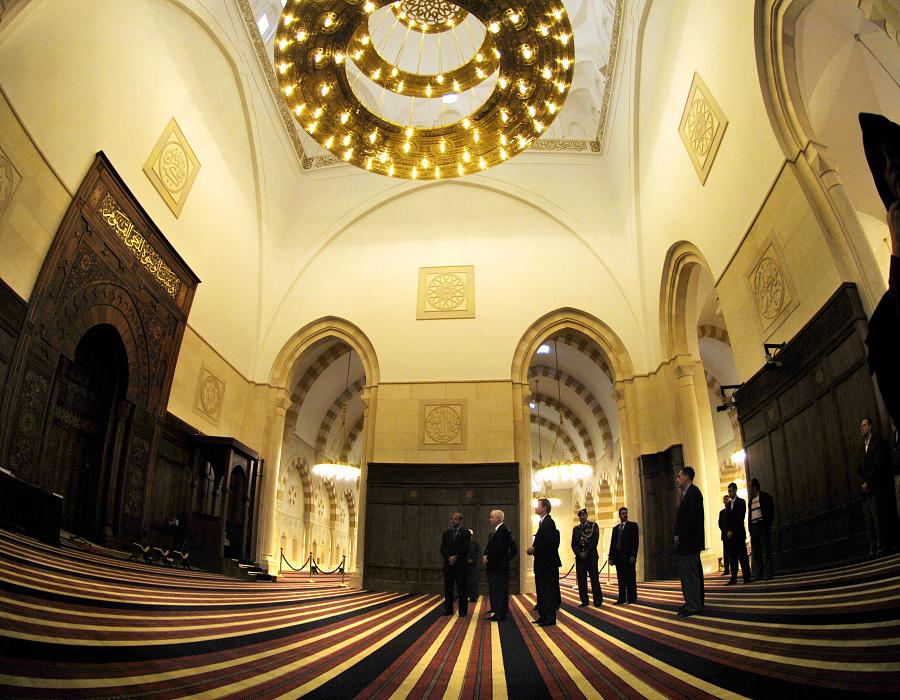 The mosque’s first floor has an entrances with high stone arches, up to ten meters. It has stone roofs and facades decorated with Islamic formations and inscriptions, on the top of main internal prayer area.

The main dome at a height of 31 meters, has roof characterized by arches and smaller domes, while the external prayer hall is covered with a group of domes constructed and formed with reinforced concrete as well as appropriate ablution areas and water supplement facilities.

The mezzanine floor, in the middle of the inner and outer prayer hall, has two areas designated as a prayer room for women, with their own ablution areas.

The mosque’s mihrab is an Islamic masterpiece, reminiscent of the traditional Islamic mihrabs made of pure wood.
Walnut and oak wood were used by tying it in a “interlock” method without using adhesive or metal for fixation, a method that has not been used for 200 years.